The Other Side of Me -- Sidney Sheldon 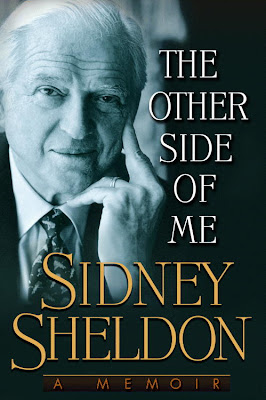 This memoir by the late novelist and screenwriter Sidney Sheldon has a great opening: “At the age of seventeen, working as a delivery boy at Afremow’s drugstore in Chicago was the perfect job, because it made it possible for me to steal enough sleeping pills to commit suicide.” Knowing that Sheldon had a long, successful career, you can’t help but wonder how he got from the point of wanting to commit suicide as a teenager to winning an Academy Award, creating several highly successful TV series, and writing eighteen novels that have sold over 300 million copies so far.

I’ve read maybe half of those novels and enjoyed all of them. I’ll probably read the others eventually, because Sheldon, while not a great stylist, was an excellent storyteller, a master at making the reader want to find out what was going to happen next. The same thing is true of this memoir, which is written in a quasi-novelistic style with lots of dialogue, no doubt recreated from memory by Sheldon. How accurate it is is anybody’s guess, but it’s entertaining, that’s for sure. Sheldon writes at length about the battles with depression that plagued him all through his life, and he doesn’t spare himself as he details all the mistakes he made in his personal and professional life. Nor does he pull any punches about people who caused problems for him, like producers Dore Schary and Harry Cohn and actor Larry Hagman. That darkness is balanced by the breezy, fast-moving style and numerous amusing passages, including several in which Sheldon’s good friend Groucho Marx takes center stage.

Ultimately, though, THE OTHER SIDE OF ME is a pretty frustrating book. Sheldon concentrates so much on his movie and television careers that his work as a novelist is barely mentioned. He doesn’t even get to the point at which he finished his first novel, THE NAKED FACE (one that I haven’t read yet) until there are only ten pages left in the book. He barely touches on his other novels and the various movies and TV mini-series made from them, giving this memoir a definite unfinished feeling, as if it’s only the first half of something. Still, I raced right through it and had a fine time reading it, so I’d recommend it to anyone who enjoys Sheldon’s novels or is interested in Hollywood during the glory days of the studio system and beyond.
Posted by James Reasoner at 12:45 PM

It's hard to get the right mix of facts in bio/autos, isn't it? I'm reading a bio of Doris Day just now and finding it frustrating because the author goes through every movie, scene by scene, critiquing her performance. What a strange approach. (He also mentions her good figure about every other page). There is no attempt to put her into the context of the times and little about her personal life. Very frustrating. But maybe someone else would find this interesting.

I think The Naked Face is his best book. For me anyway. Except for one bit tht makes me laugh out loud thirty-five (?) years later. The protagonist is a Park Ave shrink who is of course sensitive, handsome, prominent. And Sheldon tries, because this was 1975 or so, to make him hip. The shrink befriends a young black woman who is so distraught she can't talk. He finally calls her down and says, "Now let's rap." Let's rap! I believe he was wearing platform shoes when he said that, bro. Naked Face, for me, is one of the great novels of romantic suspense. He knew exactly what he was doing nd well deserved the Edgar. And didn't he have two B'way shows running simeltaneously when he was in his mid-Twenties. What a career! Ed Gorman

I'm with Ed here, but for me Sheldon's other books, especially the ones written in the nineties, are almost unreadable. And as for the hipness (and rap), there's a lot of that in Sheldon's books. In one of the books there are so awkward scenes with someone using the Internet for the first time (and especially someone trying to guide him (or it was maybe her)) that I almost shouted out aloud.