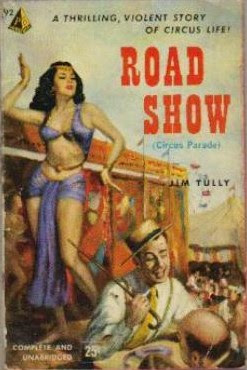 Having read and enjoyed Jim Tully’s memoir BEGGARS OF LIFE, about his life as a hobo during the early part of the Twentieth Century, I decided to try another of his books. CIRCUS PARADE is set during the same time period but focuses on a season that Tully spent traveling with a rather disreputable circus. It’s well-written and filled with circus lore, colorful characters, and both comedy and tragedy. Tully makes it seem as if the circus world was populated mostly by brutal, dishonest thugs, and to a certain extent that’s probably true. But there are a few sympathetic characters, such as Hilda, the 400-pound Strong Woman; Whiteface the Clown; and Jock, the livestock handler who was probably Tully’s best friend despite being a morphine addict.

CIRCUS PARADE is pretty episodic, and some of the episodes are so grotesque and over-the-top that you have to wonder if Tully made them up or at least embellished them. His books are supposed to be non-fiction, but I have a feeling that he didn’t always let the facts get in the way of a good story. Also, the sex and violence in this book must have been pretty shocking to readers in 1927, when it was originally published. Even a cynical old Adult Western writer like me was shocked a few times.

I didn’t like CIRCUS PARADE as much as I did BEGGARS OF LIFE, but I did enjoy it and found it to be well worth reading. I’m sure I’ll read more of Jim Tully’s books, too, but I’ll probably wait a while before trying another one.

By the way, I read the original edition, but the retitled paperback reprint has a better cover, so that's the one I've posted above.

I have always enjoyed Tully's writing but it seems that many don't know him. On Dennis McMillan's website he used to have a tribute to TUlly up. Have to check t see if it is still there.
Aldo

That's the book I have - and I have the paperback. Must get to it some of these days.

I admire this author's writing style. However, I didn't have read this ones, Circus Parade. It sounds to be very interesting because it is uncommon to read a story that happens in a circus. Buy Viagra Viagra

That is very good comment you shared.Thank you so much that for you shared those things with us.Im wishing you to carry on with ur achivments.All the best.