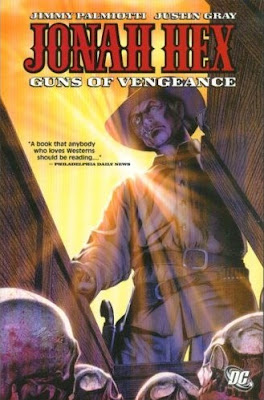 This is the second trade paperback reprinting issues from DC’s new Jonah Hex series, in this case #7 - #12. These are all stand-alone Western stories featuring the scarred bounty hunter Jonah Hex, written by Jimmy Palmiotti and Justin Gray. The biggest influences on these stories are Spaghetti Westerns and Seventies series like Edge, which were the product of British authors who referred to themselves as the Piccadilly Cowboys. So if you’re looking for traditional Western yarns, you won’t find them here. But if your taste runs more to the bizarre and gritty and violent, these are some of the best examples you could hope for. I actually liked this collection even better than the first one, JONAH HEX: FACE FULL OF VIOLENCE, because each story in this volume has a different artist, giving the reader a variety of styles. The line-up includes Paul Gulacy, who did the art on one of my favorite Seventies comics series, Doug Moench’s MASTER OF KUNG FU, and Tony DeZuniga, the artist on the original Hex series, also from the Seventies. Plenty of good stuff here.
Posted by James Reasoner at 6:06 PM