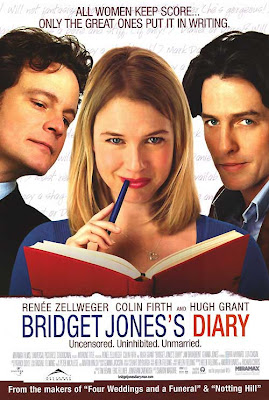 Talk about a movie for which I’m really not the target audience! I mean, BRIDGET JONES’S DIARY is based on the novel that sort of started the whole chick-lit movement (and I mean no offense by that, I’m just using it as a publishing term), it’s got a bunch of British people, and one Texan pretending to be British, in it (and I mean no offense by that, either, I’m just not British), and nothin’ blows up real good (although, surprisingly, there is a decent fistfight). But darned if it didn’t win me over with good writing and fine performances by Renee Zellweger, Colin Firth, and Hugh Grant (the latter two of which aren’t favorites of mine, but they’re good in this movie). The music is really good, too, heavy on the Van Morrison (hard to go wrong with that). So, before I set a record for parenthetical asides in one blog post, I liked BRIDGET JONES’S DIARY, and I’d say that if you haven’t seen it and don’t think you’d like it, it might surprise you.
Posted by James Reasoner at 12:50 PM

Yes, I found it a pleasant distraction, too. And while we're in the mood for parenthetical asides, James, what was your opinion of Renee Zellweger in THE WHOLE WIDE WORLD -- which I suspect had a subject dearer to many hearts here?

I liked it too. She did a surprisingly good British accent and did what she needed to do to look/act the part. And like most women, I love both men. Colin Forth is the premiere Mr. Darcy.

I've seen THE WHOLE WIDE WORLD only once, but that was in the Cross Plains Public Library, with original REH manuscripts spread out on a table nearby, so you can't hardly beat that. I thought Renee Zellweger was great in it, as was Vincent D'Onofrio as Howard. Michael Scott Myers, who wrote and produced the film, is a good friend of mine, so I'm a little biased. But I think it's really, really good, own it on DVD, and certainly need to watch it again one of these days.

By the way, Novalyne Price (who's played by Zellweger in the movie) taught at the same school as my mother did, in Zephyr, Texas, but a few years before my mother was there.