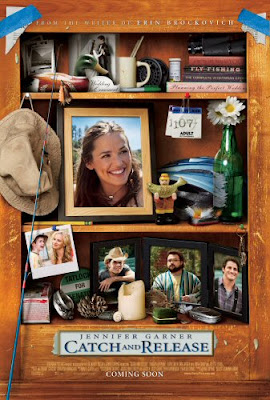 You can’t help but like Jennifer Garner. She’s just so gosh-darn cute. In the romantic comedy-drama CATCH AND RELEASE, she plays a young woman who has to cope with the sudden, unexpected death of her fiancee just before their wedding. Turns out there were things about the guy she didn’t know, which puts her through all sorts of emotional turmoil. That’s the drama part. The comedy part comes from Kevin Smith as one of her buddies, who shamelessly steals every scene he’s in. In fact, for a while I wondered if Garner’s character might fall for Smith’s character. I mean, really, would the world come crashing to an end if the fat, bearded guy wound up with Jennifer Garner for a change?

That note of bitterness aside, CATCH AND RELEASE is well-made, well-acted, but only intermittently amusing and not very involving at all. Bear in mind, though, that I’m clearly not the target audience for this sort of film.
Posted by James Reasoner at 5:38 PM

I'm all for the fat, bearded guy.