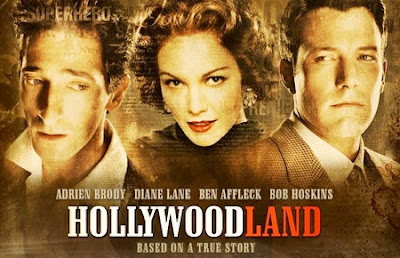 First of all, I was a huge fan of the Superman TV show with George Reeves when I was a kid. The scenes in this movie of kids rushing home from school so they could plop down in front of old black-and-white TVs and watch Superman, well, I was one of those kids . . . although in my case, I was watching the episodes in reruns in the early Sixties, rather than first-run in the Fifties. Channel 11 ran THE ADVENTURES OF SUPERMAN every afternoon at four o’clock for years, and the school bus dropped me off at the end of the street about 3:55. It took me most of that five minutes to make it up the hill to my house, and if the bus was running a couple of minutes late I had to hurry to get there in time to see the opening. My mother usually had the TV on and tuned to the right station for me.

So you can see why I would enjoy HOLLYWOODLAND. The scenes with Ben Affleck as George Reeves filming the TV series put a nostalgic grin on my face. Affleck is excellent, as is everybody else in the cast. I’ve never been an Adrien Brody fan, but he’s got the sleazy, loser PI down pat as his character goes about investigating Reeves’ alleged suicide after the Superman TV series is cancelled and the actor can’t get any other work because he’s been so effectively typecast.

I vaguely remember Reeves’ death, but I don’t recall hearing any speculation at the time about whether it was suicide or murder. But I was a little kid in a small town in Texas, so I wasn’t really plugged into the Hollywood scene. I’d never even heard of Eddie Mannix, the MGM executive with whose wife Reeves had a long-running affair. Over the years I’ve run across those rumors but haven’t done much reading on the case, so I’ve never really come to a conclusion. Neither does HOLLYWOODLAND, although I think it’s pretty clear what the filmmakers want the viewer to believe.

The period details are just right; if there are any anachronisms, I didn’t spot them (although it’s possible they’re there and I just didn’t notice). The frequent switching back and forth between timelines requires some attentive watching, and the plot gets fairly convoluted before it’s over. But the entire cast does a fine job, the photography is really good, and although the pace is a little slow starting out, the movie eventually drew me in and held my attention right to the end. HOLLYWOODLAND isn’t a period PI classic like CHINATOWN, say, but it’s a good movie and well worth watching.
Posted by James Reasoner at 9:13 PM

I've got a few years on you. I was one of those kids watching on the black and white. I remember reading about Reeves' death, but I was old enough to realize he wasn't reallt Superman.

I, too, saw the show when it originally aired. I never had to race home from school, however. It was on well after I got home. When I read that Reeves allegedly committed suicide I was as nonplussed as when I heard Dennis Weaver left Gunsmoke. In my mind they had perfect lives and I couldn't comprehend why they'd change or end it.

I stumbled across Godis when I was in film school at UCLA.

I found CASSIDY'S GIRL...read it on a very long, hot weekend...where the ocean winds came and tore into old memories of some dark alleyways I always felt comfortable sleeping in, in the dead of winter back in a lost and tossed Midwestern world.

How could I finally toss Cassid's Girl down without wondering who was taking more than a few, long stabs at my old Rebecca?

Yeah. Her. She who took this rusted thing I call a soul for more than a spin one year later.

I got GOODIS from page one.

Even wrote an adaptation of CASSIDY'S GIRL for the helluva it.

Then...a few years later, some piece of shit for an excuse of a director had bought the rights to the book...turned into his adaptation and was trying to lie and kill his way through idiot investors to make a movie out of it.

Of course he thought it should be transpoted to New Orleans...instead of the L.A. harbor area where it really needs to be at.

I'll always read more of Goodes.
What a helluva an influence.

Time I got back to writing fiction again instead of just screenplays.