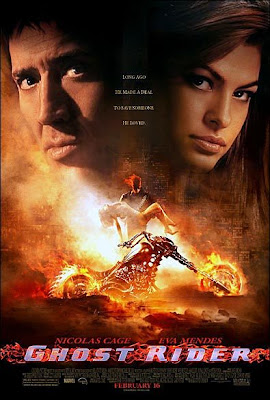 Forget what the critics said. GHOST RIDER is a good movie. Not a great film, not a sterling example of cinematic art, but just a darned good piece of entertainment.

If you’re interested in this movie at all, you probably already know the story: motorcycle stunt rider Johnny Blaze sells his soul to the Devil in an attempt to save someone he loves and ultimately becomes the Ghost Rider, Satan’s bounty hunter who collects evil souls and zips around on a motorcycle with a flaming skull where his head should be. If that sounds silly to you, you might as well avoid this movie. If it sounds like a great comic book, that’s because it was, back in the Seventies, courtesy of writers Roy Thomas and Gary Friedrich and artist Mike Ploog (all of whom are featured in one of the extra segments on the DVD, by the way).

Nicholas Cage does a fine job as Johnny Blaze, but to me, the highlight of the film is Sam Elliott’s performance as the mysterious caretaker of a cemetery. Elliott’s real identity won’t come as a big surprise to anyone paying the least bit of attention, but still, several of his scenes with Cage near the end of the movie sent chills down my spine and put a big grin on my face. You’ll know the sequence I’m talking about when you come it, if you’re anything like me.

Of course, I do have a few complaints. The lighting is so dark at times that it’s almost impossible to tell what’s going on, and the actors mumble so much that about halfway through we gave up and turned the captions on so we could understand what they were saying. Despite that, I enjoyed this movie as much as anything else I’ve seen lately, and I highly recommend it.
Posted by James Reasoner at 3:27 PM