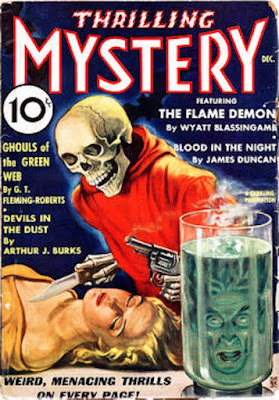 This is the second issue of THRILLING MYSTERY, launched by the Thrilling Group to compete with the success of Popular Publications’ leading Weird Menace pulp DIME MYSTERY. I don’t know who did the cover, but it’s plenty garish and eye-catching. An e-book reprint of this pulp is available from Radio Archives, so being both time- and attention span-challenged, I read it recently.

Wyatt Blassingame was one of the top Weird Menace authors over at Popular, so it’s no surprise to find him leading off this issue with a novelette called “The Flame Demon”. I’ve liked everything I’ve read by Blassingame, but unfortunately, this yarn about a villain calling himself the God of Fire comes across to me as pretty uninspired. There are some nice action scenes—lots of big fires, and the protagonist finds himself in a really harrowing position—but Blassingame seems to have phoned in the muddled plot, which requires quite a bit of unconvincing exposition in the final pages to explain. I don’t have any way of knowing, of course, but I suspect that Rogers Terrill at Popular rejected this story and Harvey Burns, the editor at THRILLING MYSTERY, snapped it up because of Blassingame’s name recognition in the genre.

“Voice From Hell”, a short story by Jack D’Arcy (really D.L. Champion, creator of the Phantom Detective), is a Poe-like tale with a clever twist to it about a murderer tormented by his crime. It’s a slight but enjoyable story and an improvement over Blassingame’s novelette.

This issue really begins to pick up steam with “Ghouls of the Green Web”, a novelette from the dependable G.T. Fleming-Roberts. It’s set in a small Kansas city during the Dust Bowl, one of the few pulp stories I’ve read to use that bit of real-life history in its plot. Fleming-Roberts does a really nice job with it, too. The writing is excellent. Fleming-Roberts’ prose can be lurid, over the top, and genuinely creepy when it needs to be, and then turn around and achieve a terse, hardboiled, poetic effect. The menace seems a bit more realistic than some, as well. I really enjoyed this one.

I don’t know anything about James Duncan, author of the novelette “Blood in the Night” except that his real name was Arthur Pincus and that he wrote dozens of mystery, detective, and Weird Menace stories for a variety of pulps. His story in this issue is a bit of a kitchen-sink tale, with a witch’s curse, murders that appear to have been committed by a vampire, and an old house full of heirs to a fortune who benefit by knocking each other off, a set-up reminiscent of an Agatha Christie novel, plus a master detective who is, at least, nothing like Hercule Poirot. Duncan pulls it all together and makes it work in a reasonably entertaining fashion.

Likewise, I know very little about Saul W. Paul, author of the short story “Forest of Fear”. That appears to have been his real name, and he sold about a dozen stories in the Thirties, mostly to the Spicy pulps. This story, about a honeymooning young couple who encounter a deadly menace in the woods, is only borderline Weird Menace and has nothing even apparently supernatural about it, but it does strike a few nicely creepy notes.

Arthur J. Burks was a million-words-a-year man, so I’m surprised I haven’t read more by him, only a few stories here and there. His novelette in this issue, “Demons in the Dust”, is another Dust Bowl yarn, but Burks carries the situation so far that this story reads more like post-apocalyptic science fiction than Weird Menace. And as post-apocalyptic SF, it’s not bad, although the plot—the protagonist and his newlywed wife try to escape from a particularly bad dust storm—is a little thin. But there’s lots of action and it’s well-written, making for a bleak but satisfying tale.

H.M. Appel is another author I’m not familiar with, except for seeing on the Fictionmags Index that he wrote several dozen stories for various Weird Menace and detective pulps. His short story “Hooks of Death” isn’t really Weird Menace, either, despite being fairly grisly in places. It’s about a young highway patrolman’s pursuit of a serial killer stalking a particular stretch of road. The prose has plenty of momentum and the hero’s background furnishes a nice twist.

Jack Williamson isn’t a name I expected to encounter in the Table of Contents in a Weird Menace pulp, but in addition to being one of the giants of science fiction, Williamson also wrote a considerable amount of fantasy and horror, so it’s not that much of a stretch. His novelette “Grey Arms of Death” is about some very Cthulhu-like creatures from the depths of the Atlantic Ocean stalking some deep-sea explorers and invading a lonely cliffside mansion. I don’t know if Williamson ever read Lovecraft, but based on this story I feel like there’s a good chance he did. This is pure Weird Menace, and Williamson, already a very seasoned pro in 1935, throws himself into the breakneck, lurid prose with great gusto. This is a fast-moving and very entertaining story, probably my favorite in the whole issue.

Overall, this issue of THRILLING MYSTERY is a satisfying read, even though some of the stories don’t fit the Weird Menace genre that well. I have no way of knowing, but since it was only the second issue, I suspect that the stories by Duncan, Paul, and Appel were intended originally for POPULAR DETECTIVE or possibly as back-ups in THE PHANTOM DETECTIVE and were pulled out of inventory to go in THRILLING MYSTERY. But that’s pure speculation on my part.

Cover was by Rafael DeSoto (DS 35) on cover
Sheila Vanderbeek

Sheila, thanks for the artist ID!

James, in an interview, Jack Williamson answers your question:

“I’ve had stories published that really shouldn’t have been published, certainly. Back in those hard times, I wanted to write for the horror magazines, which were new and paying good rates. I wrote “The Mark of the Monster”, which was too heavily influenced by H.P. Lovecraft. It was rejected by the horror magazines. I sent it to Weird Tales. They accepted it and published it with a cover picture. The readers panned it heavily. I wish that it had never seen the light of day.”

Well, now I'm going to have to go find "The Mark of the Monster" and read it! (It's in the May 1937 issue of WEIRD TALES and in the Haffner Press collection SPIDER ISLAND, for those of you who are also intrigued.)