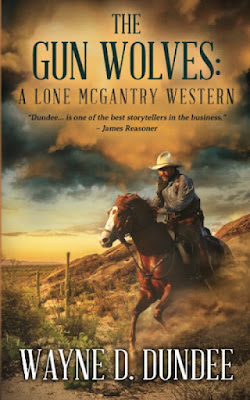 Wayne D. Dundee’s novels featuring former army scout Lone McGantry are some of my favorite current Westerns. The most recent entry in the series, THE GUN WOLVES, finds McGantry on the trail of a no-good thief who stole his horse. He discovers that a beautiful female bounty hunter named Velda is after the same hombre, and McGantry doesn’t fight too hard against the idea of teaming up to go after their quarry.

The problem is that the fella is on his way to a Wyoming town called Pickaxe, which is run as an outlaw sanctuary by Lobo Hines and his band of killers known as the Gun Wolves. McGantry and Velda decide that they’ll infiltrate the town by her posing as a saloon singer and him as the hardcase she hired to accompany her to her destination. But on the way they meet a traveling preacher and his beautiful blond daughter, which leads to a number of complications that McGantry didn’t foresee.

As always, Dundee delivers another solidly entertaining traditional Western in THE GUN WOLVES, which is available in ebook and trade paperback editions. There’s plenty of tough, gritty action, some truly despicable villains, enough plot twists to keep things interesting, and a great protagonist in Lone McGantry, ably assisted this time by the capable and appealing Velda. (Named after Mike Hammer’s secretary, perhaps?) In my mind, Lone McGantry is John Wayne from the era of THE COMANCHEROS and THE SONS OF KATIE ELDER, and every time I read one of these books I feel like I’m watching an early Sixties movie with the Duke that I didn’t know existed until now. They’re great fun, and I highly recommend the entire series.

Posted by James Reasoner at 8:25 AM