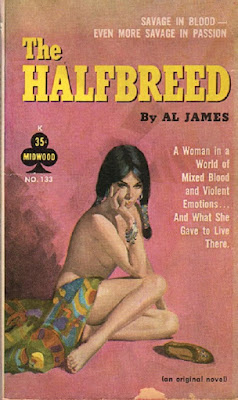 Despite what the cover of this 1961 novel published by Midwood implies, THE HALFBREED refers to the protagonist, half-Irish, half-Seminole Frank Osceola. Frank runs a souvenir stand on the Tamiami Trail, and like a lot of guys in noir novels, he’s vaguely dissatisfied with his life despite being married to a beautiful young Seminole woman. Then one day a fancy car pulls up to the souvenir stand, and out of it climbs a stunningly beautiful redheaded young woman, who—you guessed it—is unhappily married to a rich older man.

After some brief flirting, the redhead leaves, but the next day while Frank is out on his fishing boat (he does some fishing to supplement the meager income from the souvenir stand), he spots a capsized boat and pulls two survivors from the water, one of whom is the rich guy.

The other one, who just happens to be naked, is—you guessed it again—the beautiful redhead.

Al James was really Albert James Hjertstedt, and most of you probably recognize that last name. He was the son of Gunard Hjertstedt, better known to all of us as Day Keene, one of the top writers of the pulp era and then a major name as a paperbacker in the Fifties and Sixties. THE HALFBREED, with its Florida locale and noir setup, easily could have been a Gold Medal paperback by Day Keene.

Instead, being a Midwood book by his son, it takes a different tack, at least starting out. The first two-thirds of the book mostly ignore the noir elements in favor of spinning a tale of domestic drama, complete with several non-graphic sex scenes. Only in the final third does the book begin to pick up steam as the author sends the unhappily married couple, along with Frank, on a treasure hunting expedition in the Caribbean.

James develops some genuine suspense in that final third, and there’s a nice plot twist toward the end that I didn’t see coming until it was practically on top of me. As far as I’m concerned that redeems what had been a somewhat lackluster book at times. James’s prose is pretty slick and his characters are interesting and the story moves right along for the most part. That the book wasn’t exactly what I expected it to be is my fault, not his. He knew the market he was writing for.

Nobody has ever reprinted any of Al James’s books, as far as I know, and I don’t expect anybody to do so now. I have one of his novels that he wrote for William Hamling’s Nightstand Books, and I’ll happily give it a try based on reading THE HALFBREED. I won’t be rushing out to look for more of his books, though, unless the next one really impresses me.

Interesting on several counts, James...not least that I'd not been aware of the Keene/James connection previously, while knowing of AJ mostly from his contributions o he sleazier digests. (Also, cover image woman is very Cauc and not terribly redheaded...Midwood was a stickler for detail, clearly).