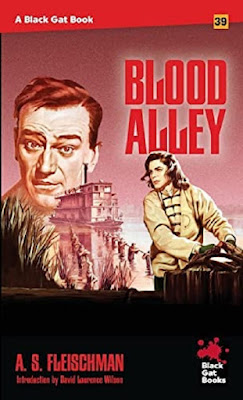 The film version of A.S. Fleischman’s 1955 novel BLOOD ALLEY has the distinction of being one of the few John Wayne movies I didn’t love as a kid. Maybe it’s because the Duke wasn’t playing a cowboy. I haven’t seen the movie in more than 50 years, but when Black Gat Books reprinted Fleischman’s novel recently, I decided I ought to read it, since I’ve enjoyed other books by Fleischman that I’ve read.

Ship captain Tom Wilder is an old China hand, but as BLOOD ALLEY opens, he’s a prisoner of the Communist Chinese who have seized power a few years earlier. He’s an American, which is the only crime he needs to be guilty of as far as his captors are concerned. But he’s helped to escape by some mysterious benefactors who turn out to be the inhabitants of a village suffering under Communist rule. They want Wilder to help them steal a ferryboat and then take it through the Straits of Formosa—also known as Blood Alley—to Hong Kong. All the villagers are going along on this perilous journey, with as many of their belongings as they can take with them.

It’s a crazy scheme, but Wilder admires the villagers’ audacity and desire for freedom. And it doesn’t hurt that the beautiful daughter of a British medical missionary is also on hand and will be part of the voyage. So Wilder agrees to help the villagers escape from under the brutal boot of the Red Chinese.

Naturally, all kinds of things go wrong, both during the preparations and then the theft of the ferryboat and the journey itself. A blurb from author Michael Scott Cain on the Black Gat edition says, “[Fleischman] specialized in the ‘one damn thing after another’ school of fiction.” That’s really true in this book, as he piles problem after problem on Wilder and the people he’s trying to help.

I’m really glad I read BLOOD ALLEY, because it’s a superb adventure novel in the classic style. Much of it reminded me of the work of H. Bedford-Jones, and you know that’s high praise from me. Wilder is an excellent protagonist, and Fleischman creates enough suspense that he had me flipping the pages eagerly to find out what was going to happen. I think this is my favorite of his books that I’ve read so far. 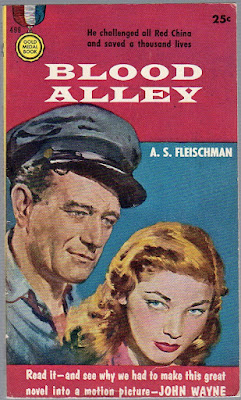 Which makes me wonder why I didn’t like the movie. The film rights to the book were sold before it was published, which explains why the original Gold Medal edition has John Wayne and Lauren Bacall on the cover. It seems like it would be a natural. Maybe it’s because Lauren Bacall seems miscast to me as the doctor’s daughter, and I’ve never been a big fan of her work to start with, except in the movies where she’s teamed with Humphrey Bogart. (Speaking of which, there’s a line in the book where Cathy tells Wilder that if he needs anything to “just whistle”. I really have to wonder if Fleischman added that line after he found out that Bacall was attached to the project! I do love her in TO HAVE AND HAVE NOT, by the way.) I’m really tempted to watch the movie again and see if I like it better now than I did when I was a kid.

But enough about that. I think the novel BLOOD ALLEY is really good, one of the best books I’ve read lately, and I give it a very high recommendation. It’s available in ebook and paperback editions and also features a fine introduction by David Laurence Wilson.
Posted by James Reasoner at 6:30 AM

It's been a long time since I've seen the movie, but I remember Wayne's character flummoxing his captors by speaking to an imaginary someone he calls "Baby" so they think he's nuts. After his escape, he continues doing that--until the final embrace with Bacall, where he looks up and says, "So long, Baby." I'm wondering if that was in the book or just a movie addition.

That's just in the movie. He calls Cathy, Bacall's character, "baby" a few times, but it's just a casual endearment.

I watched the movie some years ago as an adult, and I loved it. So perhaps you should give it another chance.