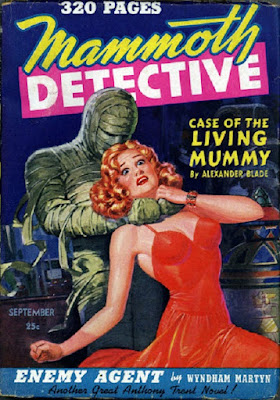 I've said it before, and it's still true: you can't trust mummies. This cover is by Ziff-Davis regular Robert Gibson Jones. I always like his covers, and this one is no exception. Inside this issue are a number of authors I also associate with Ziff-Davis: Howard Browne, William P. McGivern, Dwight V. Swain, David Wright O'Brien (as himself and as John York Cabot), and house-name Alexander Blade. But there are also some authors who I don't think of as your usual Z-D authors: Robert Leslie Bellem, G.T. Fleming-Roberts, George Armin Shaftel, and Harold Channing Wire. MAMMOTH DETECTIVE lived up to its name. There are well over 300 pages in this issue.
Posted by James Reasoner at 6:30 AM

All the MAMMOTH titles tended not to lie! Jones's figures tend to look a bit too cartoonish/mannikin-esque to me, but I can dig some, particularly for FANTASTIC ADVENTURES. One only wishes the writers at ZD were consistently encouraged to do their best, rather than have it in Tuesday...even in his yardgoods stories, McGivern particularly would often put in a certain spin on things, much as Bloch might (mixing some good jokes in with the easy ones, in the latter's most minor work).