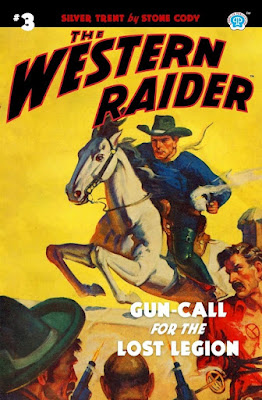 GUN-CALL FOR THE LOST LEGION is the third and final full-length Silver Trent novel by Thomas Mount writing under the pseudonym Stone Cody. The pulp in which it appeared, THE WESTERN RAIDER, was cancelled under that title after the December 1938/January 1939 issue came out, although for publishing and mailing purposes, it was retitled for one issue as THE OCTOPUS and one issue as THE SCORPION, both featuring the crimefighter Dr. Skull.

But that has nothing to do with our purpose here, which is to pick up the saga of good guy outlaw Silver Trent and his band of Hell Hawks. Any resemblance to Robin Hood and his Merry Men is probably not coincidental. In the first two novels, Trent battled his arch-nemesis Esteban Varro, also known as El Diablo, and defeated Varro’s schemes even though the would-be dictator of Mexico escaped both times. As GUN-CALL OF THE LOST LEGION opens, Trent and his men are at a fiesta celebrating his upcoming marriage to the love of his life, the beautiful Gracia Cary. But agents of El Diablo infiltrate the party, dope the wine, and kidnap Gracia, taking her back to Varro’s stronghold in the mountains where he has enslaved the local farmers and forced them to work in his secret gold mine. Trent and the Hell Hawks recover from being drugged and give chase.

That’s the entire plot. The rest of the book consists of running gunfights, ambushes, sneaking around, and a final epic battle. Gracia and El Diablo don’t actually appear until the story is almost over. This is the same sort of thin plot that weakened the previous book. However, I still enjoyed it quite a bit because Mount is one of the best authors I’ve found at the sort of over-the-top, thunderous, fast-moving Western pulp prose that I love so much. The action just gallops along. Silver Trent is an almost superhuman protagonist, and his sidekicks are colorful and entertaining. Mount really puts them through the wringer in this book, too. The mental and physical torture Silver has to endure reminded me of how Norvell Page treated Richard Wentworth in the pages of THE SPIDER.

Following the demise of THE WESTERN RAIDER, Silver Trent appeared in ten more novellas and novelettes by Mount that were published in STAR WESTERN. I don’t know if the on-going story from the novels continues in the shorter stories, but all of them have been reprinted by Altus Press and I have copies sitting right here by my computer. I plan to get to the next volume soon. In the meantime, if you’re a fan of pulp Westerns, I recommend the Silver Trent series, all of which are available in very nice trade paperback editions. Just be sure to read them in order.