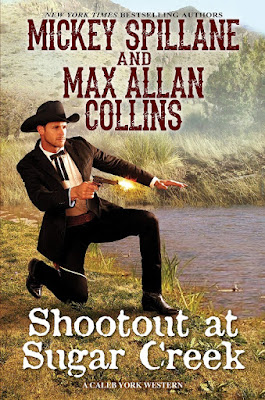 The Caleb York series, written by Max Allan Collins and based on a character created by Mickey Spillane, started out strong and has gotten better as it goes along, coming to an end (for now) with a terrific range war novel that stands with the best of the classic Western writers.

Following closely on the events of the previous book, former gunfighter and Wells Fargo detective Caleb York, currently a lawman in Trinidad, New Mexico, finds himself caught up in the clash between two strong women: Willa Cullen, the beautiful young ranch owner York wants to marry, and Victoria Hammond, newly arrived in the territory and determined to start a cattle empire built on rustling, intimidation, and outright murder if that's what it takes. The fight over water rights between Willa and Victoria expands to include a number of hired gunmen on both sides and plenty of blood being spilled.

Collins never lets up on the pace in this book. It races along with plenty of action and characterization and occasional bits of humor. In Victoria Hammond, it also has one of the most despicable villains I've encountered lately, willing to sacrifice her own flesh and blood to gain what she wants and a more than worthy adversary for York. The regular supporting characters show up, too, including York's scruffy sidekick/deputy Jonathan P. Tulley (in my head, he's always played by the great Al "Fuzzy" St. John) and saloon owner Rita Filley, part of an uneasy romantic triangle with York and Willa. (If you ask me, and nobody did, York should pick Rita.)

In his acknowledgments, Collins also has a nice mention of the Western Fictioneers for the research help the group provided. It's always good to see WF get a little publicity.

I hope Collins finds time in his schedule to continue this series. I've really enjoyed it. I think I've compared them before to the Amos Flagg series by Clifton Adams writing as Clay Randall. If you're a fan of traditional Western action novels, I give the Caleb York books a very high recommendation.

With an endorsement like that, I have no choice but to buy it.