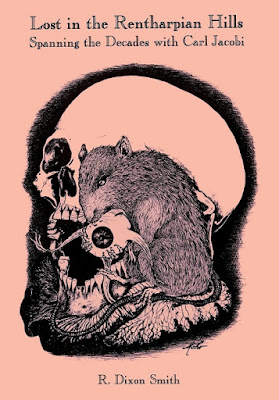 As I mentioned that I might, prompted by reading Hugh B. Cave’s memoir MAGAZINES I REMEMBER, I dug out my copy of LOST IN THE RENTHARPIAN HILLS: SPANNING THE DECADIES WITH CARL JACOBI and read it. This volume by R. Dixon Smith is part biography and part bibliography, and now that I’ve read it, I think it’s safe to say that between it and the Cave book, I’ve read more about Carl Jacobi and his work than I’ve read of Jacobi’s actual fiction.

The biography section, while not exhaustive, provides a good background on Jacobi’s personal life but focuses primarily on his career as a writer, which isn’t surprising that Jacobi’s life really centered on that aspect. He was a reasonably successful author of pulp stories in several different genres—horror, science fiction, mystery, and adventure—but was never very prolific because of the time he spent researching and revising his stories. As a result, he never made his living as a full-time writer except for brief stretches, but his stories are well-regarded and I have several collections of them on hand to read. He was persistent, too, staying with the writing game, off and on, from the Twenties up into the Eighties, when he sold a few stories to Chuck Fritch at MIKE SHAYNE MYSTERY MAGAZINE during the same era when I was writing for MSMM. I probably read those yarns, although I have no memory of them, and if I did, it’s unlikely I would have connected that Carl Jacobi with the same one who wrote for the pulps.

Smith rounds out this volume with an excellent bibliography of Jacobi’s work and a section of letters to Jacobi from various writers and editors, including Cave, Robert E. Howard, August Derleth, Clark Ashton Smith, and Farnsworth Wright. Overall, LOST IN THE RENTHARPIAN HILLS is an excellent book, probably more so if you’re already a fan of Jacobi’s work, but I found it very entertaining, as well.

Of course, “entertaining” is a relative term. This book left me with the same feeling about Jacobi that Cave’s memoir did, a mixture of admiration and sympathy. He doesn’t really seem to have been cut out to be a pulp writer, and yet that was where he found his most success, and then only for a relatively short amount of time. Never married, spending a big chunk of his adult years taking care of his parents, unable to adjust to changing markets, beset by physical ills and a variety of mishaps, but still trying to write even though he had limited success at it in his later years . . . I have to give him credit for his determination. I wish he’d had more luck.

But his stories remain, and I hope to get to some of them soon.

I have found his writings to be a mixed bag, but he certainly deserves both rediscovering and reprinting -- especially some of his pulp adventure stories.

Thanks for this. I loved his Weird Tales and have quite a few but had no idea he wrote into the 1980's. It seems that "life happened" to him as it does to most people and gives pause to consider the energy and determination that extremely successful writers must possess to keep it going to make a living, nonetheless an empire as some have done.

As Jerry House indicates, Jacobi's tales are somewhat hit-and-miss -- and progressively the latter as the years wore on -- but to my mind he still remains one of the more entertaining and time-tested pulpsters...their friendship aside, that he's often mentioned in the same breath as Cave is no accident. I have the LOST IN THE... volume along with six collections of his stories, including the massive MASTERS OF THE WEIRD TALE volume from Centipede Press, and have enjoyed them all. Great to see his name/work remembered here, James.