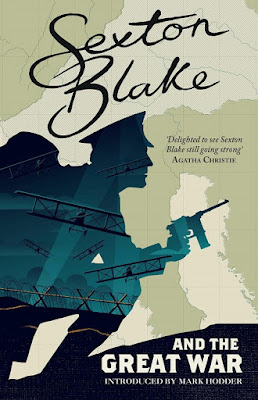 I’ve been aware of the character Sexton Blake for many, many years, having first seen the name on paperbacks during the Sixties, none of which I ever owned or read. Over time I learned more about him: inspired by the success of Sherlock Holmes, Blake is another British Great Detective (he even lives in Baker Street) who solved cases in hundreds of stories and novels by dozens of authors, published in story papers and magazines from the 1890s through the 1960s. He has a young assistant, Tinker, and a faithful bloodhound, Pedro, and they had all sorts of adventures ranging from traditional mysteries to high adventure to espionage thrillers.

In recent years, a lot of Sexton Blake stories have been reprinted, and I’ve picked up quite a few of them but haven’t read any until now. I started with SEXTON BLAKE AND THE GREAT WAR, a collection of three novellas set before and during World War I.

This volume begins with “The Case of the Naval Manoeuvres”, written by Norman Goddard and published originally in the story paper UNION JACK #253 in 1908. The British navy is engaged in some top-secret practice in the North Sea, but the Prime Minister thinks that some foreign power may be spying on them, so he enlists Sexton Blake’s help and sends the Great Detective to the Shetland Islands to find out what’s what. Pedro the bloodhound doesn’t appear in this story, although he’s mentioned, but Tinker is on hand and so is Inspector Spearing of Scotland Yard, who also helps out Blake from time to time. It doesn’t take Blake long to discover that not only is Germany behind the spying, but Wilhelm II, Kaiser Bill his own self, is on hand to boss the operation, which involves a zeppelin and a secret air base in the Shetlands.

That’s probably enough for a novella by itself, but Goddard actually disposes of the threat fairly quickly and instead sets up a chase through England as Blake and his allies try to capture the Kaiser and deliver him to London so that a diplomatic solution to the mess can be worked out without the necessity of having to go to war. Not only are German agents trying to rescue their leader, but other groups with their own agendas try to get their hands on the Kaiser.

The plot in this yarn is driven almost entirely by coincidence, and for a Great Detective, Blake sure does some dumb stuff now and then when the writer needs him to in order to keep things moving. But move they do, as Goddard delivers a surprisingly fast-paced and exciting tale in prose that doesn’t often read as if it were written more than 110 years ago. Blake is pretty likable, and there are a couple of great action scenes, so overall, despite its stodgy title, I enjoyed “The Case of the Naval Manoeuvres” quite a bit.

England was actually at war with Germany by the time the next novella in this collection was published. “On War Service; or, Sexton Blake’s Secret Mission” is from UNION JACK #645, published in 1916. The author is Cecil Hayter, who, according to editor Mark Hodder, is best remembered for chronicling some of Blake’s adventures that take place in Africa. The setting in this one is far from the Dark Continent, however. It’s very much a wartime espionage yarn, as Sexton Blake and Tinker are sent to Holland, where they’re supposed to slip into German-occupied Belgium and deliver an important document to someone there who’s working for the British. They have some harrowing adventures just reaching their contact, and when they get there, he’s on the verge of death, having just been attacked by German agents who’ve discovered his identity. He lives long enough to tell Blake and Tinker where the message is supposed to go, and they’re off again, knowing that even if they manage to get the document into the right hands, they’ll still face an incredible amount of danger getting back out of Belgium.

As before, there’s quite a bit of coincidence and deus ex machina in this plot, but Hayter keeps things moving along at a very nice pace. His version of Blake is a little more hardboiled than Goddard’s, and the story is grittier, not as much high adventure. I didn’t like it quite as much as the first one, but it’s still very enjoyable.

The final novella in this collection backtracks a year to 1915. William Murray Graydon’s “Private Tinker—A.S.C.” was published originally in UNION JACK #589. Through a series of odd circumstances, Tinker winds up enlisting in the army under another young man’s name and is sent to the front to fight the Germans. Sexton Blake, upset over Tinker’s disappearance, gets drawn into an assignment that takes him to the front. Naturally, they’re both going to have adventures and then run into each other, which is exactly what happens. Yet again, we get a plot that’s driven by coincidence, but along the way, we also get some decent action and a spectacular scene where Tinker and another young soldier take over a German supply train. Graydon does a great job in this section.

Overall, I enjoyed SEXTON BLAKE AND THE GREAT WAR quite a bit. Blake is a good character, and I want to see him in action again. As editor Mark Hodder points out in his introduction and story notes, after World War I, the villains in the series become more colorful and bizarre and the stakes become higher. I look forward to reading some of those yarns.

after World War I, the villains in the series become more colorful and bizarre and the stakes become higher.

The plots might not be all that great but there are plenty of thrills. All three novellas end with excellent action set-pieces.

The secret of Sexton Blake's longevity was his ability to move with the times. The Sexton Blake I first met as a boy reader in the 1950s was different from the Holmesian, Victorian gentleman of the late nineteenth and early twentieth century. The Sexton Blake I knew as a teenager and a member of the series' editorial staff in the early 1960s was different again. That Blake carried shades of Bond in cases set overseas, and often in train by secret service chief Eustace Craille, while other cases of the same period featured a kind of upmarket PI with a swish suite of West End offices and a staff which included not only Edward Carter (alias Tinker) but three female employees, all attractive and glamorous in their own ways. Move on to the present day and the Rebellion resurrection of bygone Sexton Blake successes: will they appeal to a modern audience? Possibly. Other media besides the literary have revealed the taste that exists for fiction presenting the social conditions and historical events of past generations. Recently I have myself re-read three of the best mystery novels by Dickens' contemporary Wilkie Collins and been both thoroughly absorbed and entertained by each. So perhaps Blake's survival, and a moving on into the 2020s, will hinge solely on revival. But as far as Sexton Blake goes I have to admit that personal interest remains nostalgic and biased towards the thrillers I worked on in the 1960s.

I have a couple of those Blake paperbacks from the Sixties and just ordered three more. Quite possibly some that you edited! I'm looking forward to reading them.