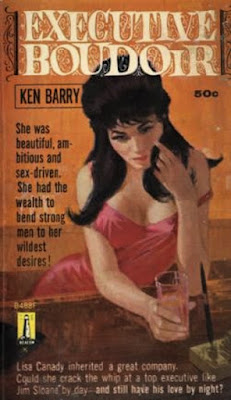 Before he became known as one of the best action writers of the Twentieth Century with dozens of Westerns, thrillers, and sword-and-sorcery novels under the names John Benteen, Richard Meade, and Thorne Douglas, Ben Haas got his start as a professional writer by turning out soft-core sex novels for Beacon Books and Monarch Books. He used the names Ben Elliott (which later became one of his Western pen-names), Sam Webster, and Ken Barry. I’d never read any of them until recently, when I picked up a copy of EXECUTIVE BOUDOIR, one of his Beacons under the name Ken Barry. Actually, I didn’t mean to read it right then, I was just looking at it, but after the first few pages, I was hooked. That’s because, no matter what the genre, Ben Haas was one of the best pure storytellers I’ve ever encountered.

As you might guess from the title, EXECUTIVE BOUDOIR is a mixture of corporate warfare and sexy, soap operatic romance. Jim Sloane is the hard-charging executive vice-president of Canady Industries. He’s in love with beautiful Lisa Canady, daughter of company president Mart Canady, who commits the company to a bad deal by buying a failing company and then immediately dying. Lisa takes over as president, she and Jim clash, both turn to other lovers for comfort, and Canady Industries teeters on the brink of ruin.

While there aren’t any plot twists in this book you won’t see coming, Haas spins the yarn with such great skill it doesn’t matter. He worked in the steel industry, and it shows, as the book has a real air of authenticity about it. There’s a good balance between the sexy romantic element and the corporate in-fighting element. Haas also has a sure hand with his characters and pacing. I stayed up later than I normally do to finish this one, that’s how much I was enjoying it. I recommend it, and I plan to read more of the books from this part of Haas’s career in the near future.

I wish there were books like this and the other Gold Medal books still being written today (and, yes, I do know about Hard Case Crime but I think they're a shadow of what they use to be 5 or 6 years ago).

I know what you mean. I have several ideas for Gold Medal style books I'd like to write, just a matter of finding the time to do so.

So I said, "What the hell," and got myself a copy. Judging from the first page, I guess Haas was like Silverberg. No matter what the job was, he never phoned it in. I look forward to reading the rest of the book soon.

That's exactly right. Haas was a top-notch professional, right from the start.