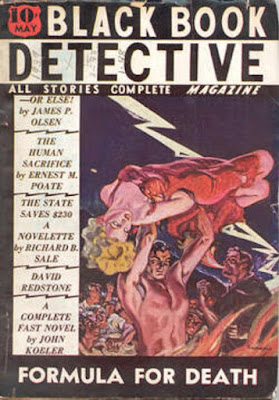 Now here's a pulp that actually does have a Norman Saunders cover, although I wouldn't say it's one of his best. Eye-catching, though. The only authors in this issue of BLACK BOOK DETECTIVE MAGAZINE who are familiar to me are Richard Sale and James P. Olsen. Some of the other names--George H. Michener, David Redstone, Ernest M. Poate, John Kobler, and Emmett B. Hargett--are just names. They all seem to have been fairly prolific pulpsters, though, so they must have had some talent.
Posted by James Reasoner at 8:58 AM

Ernest M Poate was a British writer, who wrote as Arthur Mallory too.
His series detective was Dr. Thaddeus Bentiron.

John Kobler, who died at 90 in 2000, wrote the well regarded biography, CAPONE: THE LIFE AND WORLD OF AL CAPONE (1971), as well as biographies of Henry Luce, JOhn Barrymore, and Otto Kahn, plus ARDENT SPIRITS: THE RISE AND FALL OF PROHIBITION and several true crime books.

Thanks for the information. Those Dr. Bentiron books sound interesting. Also, most of the pulpsters were gone by 2000, so I'm glad to hear that Kobler made it that long.

The various inpulpations of BLACK BOOK were reasonably to rather impressive, issue by issue.