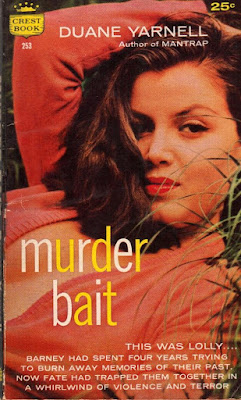 Barney Madigan returns home to the small town in the Ozarks where he was raised, planning to put in a fishing camp on some land he’s inherited next to a newly built lake. He left several years earlier to get away from an old flame who rejected his marriage proposal. Now that he’s back, who does he run into right away? You guessed it, that old flame—and she’s swimming naked in the new lake.

Before Barney barely has time to think about that, he realizes a guy in a speedboat is about to deliberately run over the girl in the water. Barney, being a good guy, naturally interferes in this murder attempt, and wouldn’t you know it, before he can even start to figure out what’s going on, his old flame has killed the guy who was trying to kill her, and she’s begging Barney to help her hide the body and solve the murder of her father. You know as well as I do how Barney responds to that.

Oh, and did I mention that the newly elected sheriff of the county is an old enemy of Barney’s, and the dead guy was engaged to a girl that Barney always regarded as his best pal, back in the days when he was chasing the unattainable lovely—who is now very attainable because she needs Barney’s help staying out of jail? 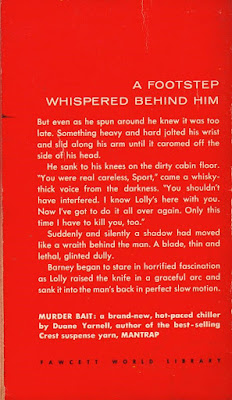 Yep, that’s the kind of book MURDER BAIT is. Everything happens in about 36 hours, and there’s a lot to cram into that time. Barney gets beat up, doped, shot at, nearly drowned, and pursued non-stop by not only the law but also the minions of the criminal mastermind operating behind the scenes of this sleepy little Ozark town. It’s a little like RED HARVEST, only set in Mayberry. There’s almost too much action at times, as the plot threatens to become ridiculously complex, but the author, Duane Yarnell, always pulls back just enough to let the reader catch his breath before plunging back into the breakneck craziness.

Duane Yarnell wrote dozens of stories for the sports pulps, as well as a handful of detective and Western yarns and a few juvenile sports novels, but in the mid-Fifties he also wrote two hardboiled crime novels for Fawcett Crest, MANTRAP and MURDER BAIT. I read and enjoyed MANTRAP a while back, but MURDER BAIT is a big step forward. This book is better paced and better plotted and maintains a sense of breathless tension from start to finish, along with providing plenty of gritty action scenes. There are some nice twists along the way. Several times, I thought I had everything figured out, only to have Yarnell spring another unexpected but logical surprise. I didn’t pin down the main villain until nearly the end of the book, although I suspected the right person more than once along the way.

Based on the improvement between MANTRAP and MURDER BAIT and how much I enjoyed both books, it’s a real shame Yarnell didn’t continue writing crime novels. But other than a few short stories in various mystery digests, MURDER BAIT is the end of his writing career, even though he lived another thirty years. I don’t know anything about him or why he stopped writing (if he stopped writing; maybe he just couldn’t sell anymore), but I would have liked to see another couple of dozen novels by him, published by Crest or Gold Medal or Ace or Dell. But we get what we get, and MURDER BAIT is a fine hardboiled novel. I give it a high recommendation.

James: After I read your review of MANTRAP I checked my collection to see if I had the paperback. No luck, but I did have MURDER BAIT. I read it immediately and agree with your review. A terrific novel and probably one of the best Crest paperbacks that I have read. Pure noir.

Sounds like my kind of book, I gotta track this down. Thanks, James!

RED HARVEST, only set in Mayberry. Now there's a plot.