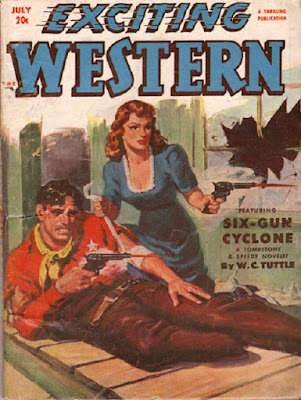 This is a pulp that I own and read recently. The scan is from my copy, and the cover art is by Sam Cherry.

W.C. Tuttle’s series about range detectives Hashknife Hartley and Sleepy Stevens is justifiably more famous and successful than his series about another Mutt-and-Jeff pair of range detectives, Tombstone Jones and Speedy Smith, which ran for more than three dozen novelettes and novellas during the Forties and early Fifties, mostly in EXCITING WESTERN. I’ve always found the Tombstone and Speedy yarns reliably entertaining, though. Unlike Hashknife and Sleepy, Tombstone and Speedy are not, shall we say, the sharpest rowels on the spur. But while they may not be smart, they’re top-notch when it comes to fighting with gun or fist, and they solve plenty of complicated cases with a combination of luck, instinct, and cow country savvy. In “Six-Gun Cyclone”, the novelette in this issue, they’ve been fired by the Cattleman’s Association that usually employs them, but despite that they wind up in the middle of a case involving rustling, brand blotting, and a bank robbery, and of course they win their jobs back by bringing the bad guys to justice after a fast-paced blend of action and broad humor. Some of Tuttle’s stories are better than others, but I don’t think he’s ever let me down and this one is great fun.

Noel Loomis is best remembered these days as a science fiction author, but he wrote a considerable number of Westerns, too. His story in this issue, “Pitchfork Country”, is about a young couple trying to establish a farm in Colorado and clashing with their brutal cattleman neighbor. The history is a little shaky in this one, but it’s well-written and there’s an unusually violent fight at the end.

The novelette “No Peace for a Prodigal” is by Leslie Ernenwein, one of the old pros in the Western genre, and is a reprint from the First July Number, 1945 issue of RANCH ROMANCES. Like a lot of stories from RANCH ROMANCES, there’s not much actual romance in this one but plenty of action. A small rancher gets caught between the two sides in a range war, is framed for a murder, and has to fight his way out of trouble and expose the actual bad guys. This is a good, hardboiled Western action yarn by an author who knew how to keep a story moving along.

The next story, “Belled Cunning”, is by an author I don’t really care for, Harold F. Cruickshank, and is an animal story, with no human characters, and I’m not fond of those, either. So . . . I passed on this one.

“Jerk Line” by Willard Luce is a railroad yarn, and I do like those, so I enjoyed this tale of bank robbers trying to use a train for their getaway. This is a reprint and originally appeared in the January 1946 issue of RIO KID WESTERN.

Samuel Mines is best remembered, if at all, for being the editor of STARTLING STORIES and THRILLING WONDER STORIES for a while, but he also wrote a good number of Western stories, including a few of the Jim Hatfield novels in TEXAS RANGERS. His novelette in this issue, “Run, Sheep, Run”, is also a reprint, originally appearing in the May, 1944 issue of POPULAR WESTERN. It’s a very traditional cattlemen vs. sheepherders yarn, with the protagonist being the government man caught between the two factions, trying to resolve their differences without an all-out range war. The elements may be familiar, but Mines handles them well and the action scenes are very good.

When I started attending the Western Writers of America conventions on the mid-Eighties, Francis L. Fugate was one of the elder statesmen of the organization. He and his wife also wrote a well-regarded book about Erle Stanley Gardner. Unfortunately, his story that wraps up this issue, “Son of a Gun Stew”, about a chuck wagon cook’s encounter with an old enemy, never really caught my interest and I didn’t finish it.

Overall, I’d say this is an average, or maybe even slightly below average, issue of EXCITING WESTERN. The stories by Tuttle, Loomis, Ernenwein, and Mines are good but not outstanding, and the others range from just okay to didn’t-finish level. As always, though, I’m glad I read it.

I have read and re-read the Fugate book, Secrets of the World's Best-Selling Writer: The Storytelling Techniques of Erle Stanley Gardner, but never knew he was a pulp writer. That book about ESG is fantastic and finally available on Amazon. I first read it via the Houston Public Library.

That book by Fugate, Secrets of the World's Best-Selling Writer: The Storytelling Techniques of Erle Stanley Gardner, is fantastic. Never knew he was a pulp writer. I read the book via Houston Public Library, but it's not on Amazon: https://www.amazon.com/Secrets-Worlds-Best-Selling-Writer-Storytelling-ebook/dp/B00OQ6XDHQ

Fugate never wrote much for the pulps, less than a dozen stories. I've read the book he and his wife did on ESG and also the one about Gardner by Dorothy B. Hughes. Gardner's not my absolute favorite writer, but he's probably in my top ten. And he's one of the few writers I continue to read with pleasure nearly 60 years after discovering his work. I may pick up the Kindle edition of the Fugates' book just to have it.

W C Tuttle fun fact. While it is well known he was commissioner of the Pacific Coast League, which in those days was something more than a minor league, less known is his son pitched for the league. Gene Tuttle played for the San Diego Padres and was a teammate of Ted Williams. Later, Gene became a western writer. His obit said he had written over 100 westerns though I have only seen/read around 10.