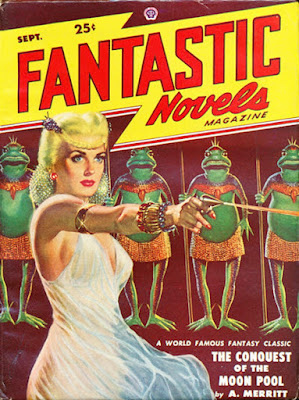 FANTASTIC NOVELS was another reprint pulp that brought back stories from the very early days of science fiction, fantasy, and horror. This issue features A. Merritt's novel THE CONQUEST OF THE MOON POOL, originally published in ALL-STORY WEEKLY in 1919 as a six-part serial. I don't know if this version is abridged, but it wouldn't surprise me if it was. THE CONQUEST OF THE MOON POOL is the sequel to Merritt's novella "The Moon Pool", and I believe both stories were combined to form the novel THE MOON POOL. I seem to recall reading that Merritt did a lot of revising to his original stories when they were combined and/or expanded in later versions, but I'm far from an expert on Merritt and his work. He's one of those authors I've enjoyed, but I haven't read much by him and always intend to read more. I own most of his work in one edition or another. What I do know is that I like this cover by an artist usually billed simply as Lawrence, real name Lawrence Sterne Stevens. I mean, a good-looking blonde with a raygun and a bunch of spear-toting humanoid frogs . . . what's not to like?
Posted by James Reasoner at 4:30 AM

Altus Press put out the combined "The Moon Pool"/"The Conquest of the Moon Pool" from the original pulps a couple of years ago, complete with all the later Finlay illos and the cover shown above.

"The Moon Pool" was influential (it's in Lovecraft's Top Ten) and extremely popular at the time. Reportedly, it ranked with readers right up with "Under the Moons of Mars"/A PRINCESS OF MARS, popularity-wise. The legendary Bob Davis demanded that Merritt write a sequel. TCotMP was the result. Merritt hated writing sequels, but I think he succeeeded in writing a worthy follow-up (the novel/novella is 119K words). Readers at the time certainly thought so.

Like A PRINCESS OF MARS, it shows some of the signs of being a first novel. Just like APoM, it's bursting with imagination and wonder. Anybody serious about pulp SFF should read it.

Thanks, Deuce. I have that reprint and am moving it up in the stack!