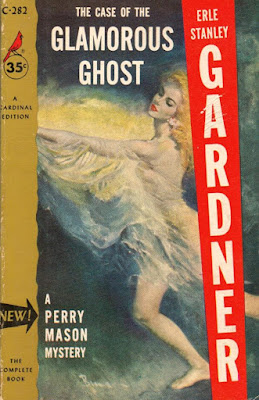 Most of the Perry Mason novels by Erle Stanley Gardner have been reprinted numerous times, some by several different publishers, and there are many, many cover variations. However, for me the most iconic editions are the ones published by Pocket Books during the late Fifties and early Sixties in the short paperback format, often with covers by Robert McGinnis. Those and the cheap hardback reprints from the Forties published by Triangle Books were my introduction to Perry Mason.

THE CASE OF THE GLAMOROUS GHOST, published in hardcover by William Morrow in 1955 and reprinted by Pocket as part of its Cardinal line in 1957, doesn’t have a McGinnis cover, but the one on this edition by Charles Binger isn’t bad. (That’s my copy in the scan.) It’s also, mostly, a very good novel.

It opens with Della Street, Mason’s secretary, handing him a newspaper containing a story about a beautiful young woman who caused havoc in the local lover’s lane by appearing almost nude, in some sort of diaphonous get-up, and distracting the couples parked there from their necking. I’m not sure how ghostly that is, but we can allow Gardner that stretch for the sake of a good title. Not surprisingly, Mason winds up representing the young woman, who claims she has amnesia when she’s picked up by the cops for disturbing the peace.

In no time at all, of course, the case becomes a lot more complicated, involving a hurry-up marriage in Yuma, Arizona (or was there actually a marriage?), jealous girlfriends, the international jewel trade, and a dead body found in the vicinity of the same lover’s lane where the beautiful “ghost” was cavorting. Mason’s memory-impaired client quickly goes from being charged with disturbing the peace to being on trial for murder. In fact, the entire second half of the book is taken up with the trial, in courtroom scene after courtroom scene, which is a good thing because nobody ever did a better job of writing those than Erle Stanley Gardner. They really kept me turning the pages.

My only real quibble is that while I’m used to complicated plots in a Gardner novel, this one becomes ludicrously so with a lot of elements hauled in late from left field. It all makes sense, but Mason seems to pull a lot of the solution out of thin air.

However, I realized a long time ago that the actual appeal of the Perry Mason novels doesn’t lie in the plots, although some of them are more interesting and well-constructed than others. What I really enjoy about this series is the friendship and banter between Perry, Della, and Paul Drake, and seeing Hamilton Burger get his courtroom comeuppance yet again. Burger is in fine form in this one. He accuses Mason of being on a fishing expedition, blusters about his grandstanding, and at one point even says, “Your Honor, counsel is trying to turn this court room into a carnival sideshow!” Classic stuff that puts a grin on my face every time. Some readers might call it formulaic, but it’s exactly what I want from a Perry Mason novel, and THE CASE OF THE GLAMOROUS GHOST does a good job of delivering the goods. I’ve been reading Gardner for more than fifty years now (I actually started with one of his Donald Lam/Bertha Cool books) and don’t intend to stop any time soon.

I love the Mason series and it is one of my limited “rereads”. Agree completely that sometimes not great mysteries but always a great read.

You capture the essence of the appeal of the PERRY MASON series: the characters and the courtroom interaction. Yes, some of the plots aren't as strong as the series progressed, but the winning formula ESG devised works for over 80 books! After reading your review I'm tempted to pick up a PERRY MASON novel and read it right now!

Not too long ago, I happened to see the TV adaptation of GLAMOROUS GHOST, from Season Five (filmed in December of '61, aired in February '62).
I probably saw it for the first time in rerun, while I was in high school; I hadn't yet started reading paperback novels in earnest yet.
What I can recall from all those years back:
- The film started out with the scene of the semi-clad damsel-in-distress running around in the park, with Twilight Zone music (possibly by Bernard Herrmann) wailing in the background; this got my teenage attention.
- I happened to be just the right age for a reasonably complicated plot to keep my attention, And this one did; my Mason fanhood dates from this period.
- The Big Reveal in the courtroom is one of the best ones the TV show ever did, in my view; credit the screenplay (frequent PM scribe Samuel Newman) and the staging (PM showrunner Arthur Marks), both on their 'A' games.
- I don't know if you're familiar with The Case Of The Alliterative Attorney by Bill Sullivan and Ed Robertson, which is the best book about the Mason TV series available.
The authors had access to many of Erle Stanley Gardner's notes to the producers regarding the scripts and films, showing how much ESG cared about how the show was turning out.
Uncle Erle's notes on GLAMOROUS GHOST show that he understood the differences between a novel and a TV script, and sought to reconcile the two as much as he would have been able to; in this case, I believe that everybody succeeded quite well.
I believe that this book is still available, and I recommend that anyone who cares about our genre on television, then, now, or ever, ought to seek it out.