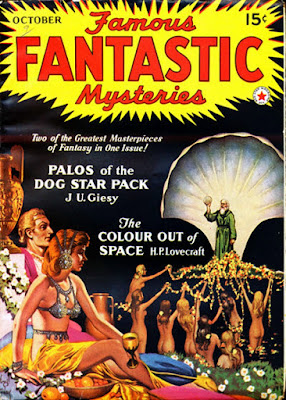 FAMOUS FANTASTIC MYSTERIES was primarily a reprint pulp, bringing back science fiction, fantasy, and horror stories originally written and published before such genres truly existed as we know them now. I seem to recall reading that some of the reprinted novels were abridged, but I don't know that for a fact. FFM was also noted for its good covers, many of them by Virgil Finlay including this one. As you can see, the lead stories in this issue are "The Colour Out of Space" by H.P. Lovecraft and "Palos of the Dog Star Pack" by J.U. Giesy, neither of which I've ever read. There's also a short story by L. Patrick Greene, better known as the author of the African adventure series featuring a character called The Major, and a poem, apparently original in this issue, by Robert W. Lowndes. I really ought to read more of this stuff.
Posted by James Reasoner at 8:51 AM

FFM and FNM did a great service to Sf/fantasy fans from the late Thirties to the early Fifties by making available so many stories (many from the Munsey magazine) previously unobtainable. They reprinted some pretty good stuff. Also some terrible clunkers. Most, if not all issues, are available free online.

FAMOUS FANTASTIC MYSTERIES and FANTASTIC NOVELS did have to abridge some of the novels that were reprinted. But the magazines are still worth collecting because of the excellent cover art and interior illustrations. Occasionally they also printed new short stories and the letter columns were full of praise for the old Munsey magazines like ALL STORY, ARGOSY, and THE CAVALIER. Copies of both magazines are still available for inexpensive prices and they are not too hard to find. It is one of the best looking magazine titles.