Overlooked TV Movies: Goodnight for Justice - The Measure of a Man (2012) 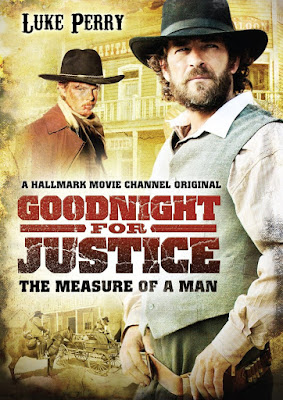 THE MEASURE OF A MAN is the second of three movies Luke Perry made for the Hallmark Channel in which he played a character he created, frontier judge John William Goodnight. In this one, Goodnight arrives in a small Wyoming settlement to hear some cases, and while he's there he not only meets an old flame of his, he's also on hand when a gang of outlaws that's been plaguing the area shows up to rob the bank. A shootout occurs, leaving one of the outlaws dead in the street and another captured. The prisoner, a young man, insists that the gang leader will come back to rescue him. Instead, we get a not too surprising plot twist that finds Goodnight setting out to hunt down the desperadoes.

This movie has many of the same drawbacks as the first one, GOODNIGHT FOR JUSTICE, such as the overall cheap look of it and that drab Canadian Western town that never looks authentic to me. However, I liked it better because the script is more tightly focused, rather than wandering around all over the place like the first one, and there are some decent lines here and there. Perry again gives a solid performance and seems to be enjoying himself, and there's some effective scenery chewing by an actor named Teach Grant as a despicable villain. One oddity is that the Goodnight character seems to have lost his touch when it comes to handling a gun. He was a crack shot in the first one but can't seem to hit much of anything this time around.

These movies aren't going to make anybody a Western fan who isn't one already, but there are enough nice moments that I enjoy them. I thought the ending of this one worked well, and I'm sure it won't be long before we watch the third and final film in the series.
Posted by James Reasoner at 3:10 AM

Have you ever been drawn to scripting, James?

I've written several film scripts, but nothing ever came from them, at least as far as movies go. For a while I was working with a friend who was the son of a prominent Hollywood producer and director, trying to develop a project for Arnold Schwarzenegger. When that deal fell through, I took the complete script I wrote and novelized it. The result was my novel COSSACK THREE PONIES, which was a finalist for the Spur Award the year it came out. I wrote a script based on a novel by a fairly well-known crime novelist who had the same agent I did at the time. She had connections in Hollywood and tried to sell it, but that never happened, either. My novel DUST DEVILS also started as a film script, but I never finished that version and made a novel out of the story, instead. I'd still like to sell a screenplay just because I never have (I'd also like to sell a comic book script for the same reason), but at this late date, I doubt either will ever happen.