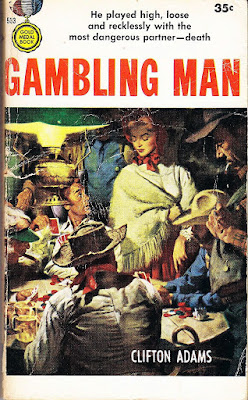 Clifton Adams had a short but solid career in the Western pulps, lasting about five years in the late Forties and early Fifties. I assume the reason he stopped writing short fiction is that he became a successful paperback novelist and eventually moved on to more success and Spur awards as a regular author for Doubleday’s Double D Western hardcover line. He was also well-regarded as a hardboiled crime novelist, although not nearly as prolific in that genre.

GAMBLING MAN is one of his early novels, published by Gold Medal in 1955 and never reprinted, as far as I know. Despite the title and the cover, this is actually a coming-of-age novel, and a really superb one, at that. Twelve-year-old Jefferson Blaine lives in the small Texas town of Plainsville, which lives up to its name as far as Jeff is concerned. Once a cattle town, it’s now mostly a supply center for farmers and a pretty boring place. Jeff lives with his aunt and uncle because his mother died giving birth to him and his father left right after he was born.

Then one day Nathan Blaine comes back to town to see his son, and Jeff is surprised to discover his father is a gunman, a gambler, and quite possibly an outlaw. His aunt and uncle don’t like Nate and don’t want Jeff to have anything to do with him, but of course that’s not the way things play out. Then the situation takes yet another turn, and a tragic one, when the local bank is robbed and Nathan Blaine goes on the run again.

This takes up the first half of the book, and it’s absolutely compelling reading, rich in characterization and very well written. Halfway through the book there’s a time jump of five years, to the point when Jeff Blaine is nearly grown and getting a bad reputation himself, just like his father. Then more outlaws show up in town, which has gotten wild again since the railroad arrived, and bring unwelcome news of Jeff’s father, news that threatens to make him finally cross the line and become a real owlhoot himself.

The second half of GAMBLING MAN doesn’t quite live up to the first half, but it’s still very, very good and builds to an exciting, emotional climax. Adams’ writing is hardboiled and top-notch all the way. This is a very solid traditional Western and gets a high recommendation from me.

Thanks for the review, James. This ardent fan of Clifton Adams did not know that "Gambling Man" existed. The novel will now join the long list of Adams' works that I keep an eye out for.

GAMBLING MAN hasn’t been reprinted any time recently, but it was reprinted in 1957 as OUTLAW’S SON (with the same cover) to tie-in with the film based on the novel. Richard Alan Simmons wrote the screenplay.

Thanks, Tim. I had no idea they'd made a movie out of this one.

Enjoyed the review, honest and forthright.

Along with a number of other Clifton Adams Gold Medal titles this novel was reissued as an ebook by the now discontinued www.munseys.com about eight years ago. Several Rough Edges followers likely have it on their Kindles or other ereaders.