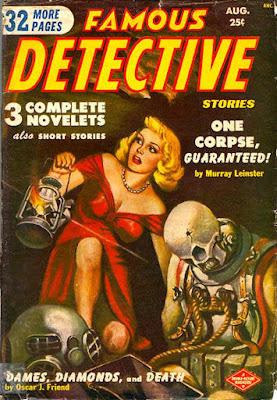 I think this may be the first "beautiful blonde in slinky red dress plus skeleton in diving costume" cover I've ever seen on a pulp. But of course I could be wrong about that. All I know is I like this cover quite a bit and it would certainly intrigue me enough to plunk down a quarter, if I had one. The lineup of authors inside is intriguing, too, since they're mostly better known for science fiction rather than detective stories: Murray Leinster, Ray Cummings, James MacCreigh (Frederik Pohl), and Oscar J. Friend, who was pretty well-known as a Western writer, too. Also on hand are Norman A. Daniels, who wrote everything, and Robert Sidney Bowen, who I always think of as an aviation writer, even though he wrote a lot of other things, too. I suspect it's a pretty entertaining issue.
Posted by James Reasoner at 5:30 AM

FAMOUS DETECTIVE, originally DETECTIVE YARNS (almost as if a latter-day parody title) and eventually CRACK DETECTIVE for a stretch and again for the last issues in '56-57, was a Columbia pulp edited by Robert A. W. Lowndes, who would edit sports, western, and other pulps for a couple of decades for Columbia and its subdivisions, but was himself primarily focused on fantasy/sf and secondarily to crime fiction...his big "Discoveries" at Columbia in the 1950s were Carol Emshwiller (who wrote crime fiction as well as SF for him) and Edward D. Hoch (who wrote a variety of things for him and was always quick to note that Lowndes was first to publish him)...after Columbia was shuttered by Louis Silberkleit, Lowndes made his way over to Health Knowledge, where on an even smaller budget he edited MAGAZINE OF HORROR and even a short-lived western reprints magazine among a range of others (his "first-published" in the '60s included Stephen King and F. Paul Wilson). (Thanks to Richard Paul Hall for catching an error in my first draft of this note.)

A good number of SF folks were always likely to be found in Lowndes' CF magazines, beyond such obvious "amphibians" as Kate Wilhelm, Kit Reed, Arthur Porges and Sam Merwin...Judith Merril, Eric Frank Russell and on and on...

I've always had a deep respect for Lowndes. It's gratifying to know he was an editor receptive to "new" writers like King, Hoch & Wilson, etc. My respect for the guy was based on the fact that he also valued the "old" (established) writers who had seen better days, like Carroll John Daly. I believe Lowndes was the last pulp editor to publish this co-founder (with Hammett) of the hardboiled genre. For my dinero, that alone makes him a great editor.

Drat. I want to read this one, and the Pulp Magazine Archive doesn't have a scan.