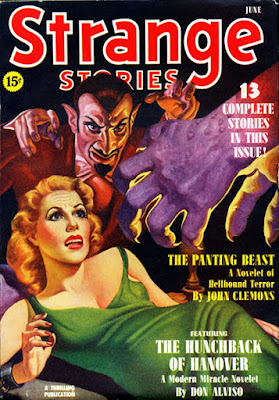 From very late in the Weird Menace boom, this issue from the Thrilling Group's entry in that genre has an eye-catching cover and some good authors mixed with several I've never heard of. On hand are Henry Kuttner (twice, once as himself and once as Keith Hammond), August Derleth (also twice, once as himself and once as Tally Mason), Robert Bloch, Hamilton Craigie (who I think of as more of a Western writer, even though he turned out stories in just about every genre for the pulps), and Don Alviso (likewise). The ones I'm not familiar with include Jack B. Creamer, Earle Dow, John Clemons, O.M. Cabral, and Maria Moravsky. It looks like a pretty entertaining issue, even if the Weird Menace pulps were running out of steam by then.
Posted by James Reasoner at 6:00 AM

Earle Dow only wrote two stories, both for this pulp. This is the second.

Maria Moravsky (1889 - 1947) wrote a baker’s dozen stories for Weird Tales, Ghost Stories, Startling Stories, and this pulp. Only her last story has been anthologized.

“The Terror Mummy” In this issue is the only published story by Jack B. Creamer.

STRANGE didn''t start as a shudder pulp...it was more of a less eccentric, more standard-pulp (almost a pun) version of WEIRD TALES. I haven't read more than the first issue, however...did it give itself over the shudder fiction in its short run?

1939 might've marked the waning days of "menace" pulps, but STRANGE was part of a new influx of fantasy/horror pulps initially, as FAMOUS FANTASTIC MYSTERIES, UNKNOWN, and FANTASTIC ADVENTURES (which admittedly leaned toward sf to being with) were all launched that year.

Todd,
I think you're right, it probably is closer to WEIRD TALES than Weird Menace.