Forgotten Novellas: A Soldier and a Gentleman - Talbot Mundy 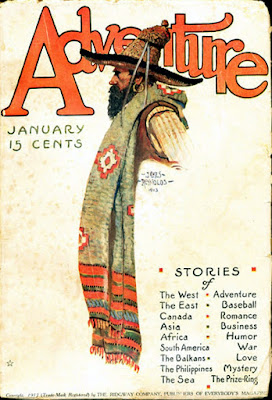 It’s been a while since I read anything by Talbot Mundy, and I was in the mood to sample some of his work again. The novella “A Soldier and a Gentlemen” was published in the January 1914 issue of the iconic pulp ADVENTURE, where much of Mundy’s work first appeared. It’s been reprinted numerous times since, including in THE TALBOT MUNDY MEGAPACK from Wildside Press, which is where I read it.

This is an important story because it’s the first one to feature Mundy’s series character Princess Yasmini, who appears in a couple of novellas and several novels, sometimes crossing over with other series characters. It’s not the first story chronologically in her history, however. That would be the novel THE WINDS OF THE WORLD. I haven’t read that one yet, but “A Soldier and a Gentleman” is a good introduction to the character.

It’s set in India and involves a regiment of Sikh lancers commanded by British officers. They’re given the job of tracking down the notorious bandit chief Gopi Lall, since the corrupt local police have been unable to do so—or paid off to fail in that task. At the same time, a young British officer falls under the spell of the beautiful but mysterious and possibly sinister Princess Yasmini, who lives in an abandoned palace in the jungle with a number of nubile young female servants. Is the place actually a brothel? Well, Mundy takes pains to make it seem like it’s not, but this story was written and published more than a hundred years ago when writers were a lot more reserved about such things, so I’m not prepared to say either way. I think it’s fairly well established that Yasmini herself is not a prostitute, although it’s open to question what else she’s capable of and why she’s really living in this rundown jungle palace.

The two storylines eventually converge, of course, and things come to a fairly satisfying climax, although it could have been a little more dramatic if some of it hadn’t happened off-screen. Yasmini is an interesting character, and so is Dost Mohammed, a stalwart Sikh officer who’s not actually the protagonist but maybe should have been. Mundy’s style tends to be long-winded at times and heavy on the telling instead of showing, but again, that’s to be expected in a story written more than a century ago. And honestly, I kind of like that lush, slower-paced style at times. Too much modern fiction I’ve read comes across as shallow. That’s certainly not the case here. Mundy really immerses the reader in what’s going on.

Despite that quibble about the ending, I really enjoyed “A Soldier and a Gentleman”. I plan to read more by Mundy soon, and if you’re a fan of good old-fashioned adventure yarns, I recommend his work.

I was on a Mandy kick years (decades) past. Jimgrim, Yasmini and his other characters are well developed in his novels but I do remember thinking he was wordy. Good stuff overall, though.

Two months ago I published "Soldier" -and- WINDS OF THE WORLD in a book I've titled YASMINI THE INCOMPARABLE. It's one of the ten volumes in my series "Forgotten Classics of Pulp Fiction," available at murnaiapress.com. The book also contains a lengthy intro by Mundy biographer Brian Taves.

Also, Altus Press has recently published an enormous collection titled, THE COMPLETE UP AND DOWN THE EARTH TALES by Talbot Mundy. This large book has the complete series plus the illustrations from ADVENTURE. You can buy it from Altus Press web site, amazon, or Lulu. Mike Chomko should have it too. Worth it at $85 because those old issues of ADVENTURE are hard to get.

I've been a fan of Talbot Mundy since I read Tros of Samothrace many decades ago. Great stuff!

Thanks for putting a spotlight on a story by Talbot Mundy, a great writer who too many have forgotten or never heard of. "Soldier and a Gentleman" has been a favorite in my family since my grandfather noticed the English hero's name is the French rendering of our family name.

Mr. Hulse: Thanks for publishing "Yasmini the Incomparable"! I think it will make a nice gift for someone I know. The blurb on Amazon has started an argument in my crowd though; the Tarzan fans insist that La of Opar is the first great femme fatale of the pulps (she was first published in "The Return of Tarzan" in New Story magazine in 1913). The Mundy fans say that she may be a beautiful, bloodthirsty priestess-queen of the last outpost of Atlantis, but that doesn't make her a femme fatale.

Me, I'm just glad to see more of the good stuff back in print.