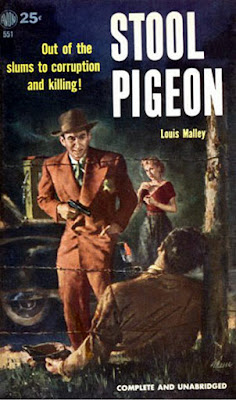 STOOL PIGEON by Louis Malley is one of those compressed time books that I enjoy. It takes place in a single 24-hour period, from six o’clock in the morning on Christmas Eve to dawn on Christmas Day, although there are a few flashbacks along the way to fill in the history of the protagonist, New York City police detective Vincent Milazzo.

Milazzo catches the case when mobster Tony Statella is murdered, shot in the head while sitting in a car in the same Italian neighborhood where Milazzo grew up. One of Milazzo’s old enemies from childhood may be involved, and Milazzo is determined to pin the killing on him, even if he has to frame him. But new angles rapidly open up in the case and Milazzo realizes that he’s on the trail of something much bigger, a conspiracy that is spreading an evil web all across the country. The problem is that he knows almost everyone mixed up in it—some friends, some enemies, even some relatives—and one of them is the girl he’s loved ever since he was a kid. Complicating things even more is the fact that his boss has given him only 24 hours to crack the case. 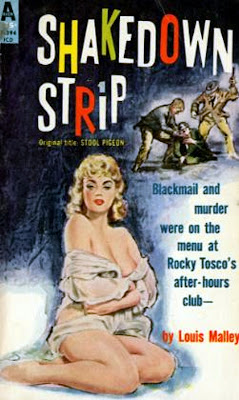 This novel, one of only four by Malley, was published by Avon in 1954 and then reprinted by the same publisher in 1960 under the title SHAKEDOWN STRIP. Somehow, I’d never come across either edition and hadn’t heard of the book until it was reprinted recently by Stark House as part of the Black Gat Books line. STOOL PIGEON is a very good hardboiled crime/police procedural novel. Vincent Milazzo isn’t a particularly likable protagonist, but the reader can’t help but root for him, the way the odds are stacked against him. Malley does a great job with the setting and characters, really bringing the neighborhood and its colorful inhabitants to life, and the pace never lets up. I enjoyed STOOL PIGEON a great deal, and I think I may have to try to find some of Malley’s other novels.

A lifetime of haunting used book stores and I'd never seen the original Avon cover for this book before. A cold-blooded little noir masterpiece, I think.

The poor guy in the foreground sprawls limply against a barbed wire fence. It's digging into his neck as his head lolls. The dame in the background is either smoking or handling a compact and seems utterly indifferent to his plight, while the classic gangster approaches with a pleased expression on his weasel-face, pistol held ready to finish the job.

Anybody know who painted it?

This is my favorite Christmas noir novel.
I'm lucky enough to have two copies of the original Avon issue.

I believe it was James Meese who painted that original cover.

Thanks for the artist ID. I agree it's a great cover.