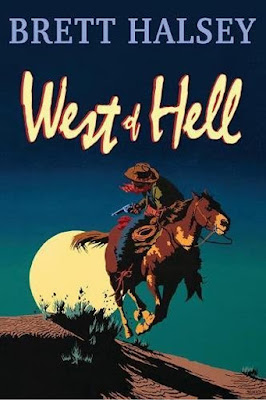 Brett Halsey has had a long, successful career as an actor in movies and TV, but he’s also written a number of novels over the years and in fact, according to his website he thinks of himself as a writer who acts, rather than an actor who writes. I tend to agree with him. His latest novel, and his first Western, WEST OF HELL, is a well written and solidly entertaining yarn.

The protagonist is bounty hunter Chris Tracy, who uses his manhunting skills to finance his on-going search for his younger sister, who was carried off by outlaws who raided the family farm years earlier. A veteran of the Civil War, Chris is a decent but highly dangerous man when he needs to be. In this book, he teams up with a friend from the war and an old desert rat in a quest to recover some ancient golden figurines hidden in the New Mexico Territory wilderness. These little statues, known as the Golden Apostles, date back to the days of Spanish rule over the territory.

Naturally, several hardcases are after the valuable statues, too, and along the way Chris and his companions also run into a shady gambler and the man’s wife and stepdaughter. This trio complicates things quite a bit, too, and eventually tragic violence breaks out.

WEST OF HELL is a pretty gritty book, the sort where you never really know who’s going to survive and who isn’t, and Halsey springs a number of unexpected plot twists as well. This one doesn’t play out in some respects as you’d probably expect. Having written and read so many Westerns, I’m generally pretty confident that I have a good idea what’s going to happen. In WEST OF HELL, not so much.

Halsey does a fine job of developing the characters and depicting the landscape. It’s easy to imagine him playing Chris Tracy in a Spaghetti Western version of this tale from the Sixties, when Halsey was in Europe making some of those films. He admits in an afterword that that experience was an influence on the writing of this book.

I enjoyed WEST OF HELL quite a bit. It’s a good hardboiled Western and could easily be the first of a series. I wouldn’t mind a bit if it was. Recommended.

Halsey's film credits are pretty amazing. From 'A' pictures to pure drive-in schlock, from serious drama to lurid splatter horror, from direct to video action flicks to The Godfather III.
He was in Boetticher's The Man from the Alamo, Tony Curtis's underrated swashbuckler The Black Shield of Falworth, The Revenge of the Creature, Audie Murphy's bio-pic To Hell and Back, Return of the Fly, The Atomic Submarine (I love this movie). He was on Colombo and Charlie's Angels and Knight Rider and The Dukes of Hazzard and Mike Hammer.
Sitting down with him over a drink would be a real treat.
And he writes well. This guy is awesome.

He was also married to Luciana Paluzzi, who played Fiona Volpe in Thunderball, so he's one hell of a guy for sure. I keep meaning to read his Magnificent Strangers novel, about American actors in Italy in the '60s. I recently reviewed one of his few Eurospy movies, "Spy In Your Eye," on my blog, but other than "Girl From Lover's Lane" (which I only saw in its MST3K version), I haven't seen any of his work.