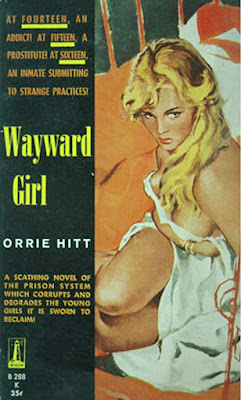 WAYWARD GIRL starts out about as bleak as any Orrie Hitt novel I’ve read so far. The protagonist, Sandy Greening, is a 16-year-old prostitute and heroin addict who lives with her drunken, slutty mother and is a member of the Blue Devils, the local gang of young hoodlums who are at war with a rival gang, the Black Cats. Sandy was raped by a neighbor when she was 14, she has to fend off the advances of her mother’s drug-dealing boyfriend, and when the leader of the Blue Devils kills a guy during a rumble, she’s hauled in by the cops for questioning in a murder case!

With all that going on, it’s a little surprising that when Sandy does finally get in trouble with the law, it’s a simple prostitution bust that gets her sent to a reform school. That reform school is a progressive one that tries to rehabilitate the girls sent there. At least it is on the surface, but the school has some criminal secrets of its own . . . 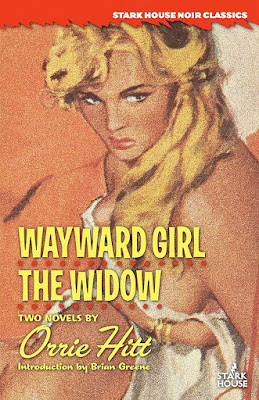 As you’d expect from a novel published by Beacon Books in 1960, WAYWARD GIRL gets pretty doggone lurid. And after a little bit of a slow start, man, does our old friend Orrie Hitt keep the pedal to the floor. This book races along and is hugely entertaining. Brian Greene, who contributes the introduction to the Stark House volume that reprints this novel and another Hitt tale, THE WIDOW, compares WAYWARD GIRL to a drive-in movie, and that’s pretty accurate. I can see it being filmed in gritty black-and-white.

What elevates it from the usual story like this, though, is the theme of sympathy for the underdog that runs through most of Hitt’s novels. He doesn’t sugarcoat things, and he doesn’t blame society for the characters’ problems. They bear the responsibility for their own actions and bad decisions. But there’s also a sense of understanding what led them to those actions and decisions, and Hitt seldom comes right out and condemns his protagonists. They usually find their way back to the possibility of happiness, at least. Hitt’s novels are like no others in the so-called sleaze genre, and while some are better than others, I’ve never read one that failed to leave me both entertained and emotionally moved. If you’ve never read his work, WAYWARD GIRL would make a decent starting place. If you’re already a Hitt fan, like me, you’ll want to grab this new reprint right away.