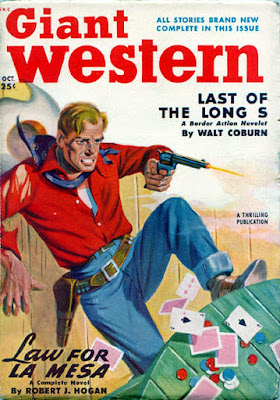 As usual, the poker game gets interrupted by a gunfight. Makes you wonder if they ever finished a hand in the Old West without burning powder. But there are some good authors in this issue of GIANT WESTERN, starting with two of my favorites, Walt Coburn and Leslie Scott (writing as A. Leslie this time around). There are also stories by Robert J. Hogan (probably best remembered for his aviation stories, including G-8 AND HIS BATTLE ACES, but he wrote a lot of Westerns, too), Ben Frank, Francis H. Ames, and house-names Sam Brant and Clay Starr.
Posted by James Reasoner at 4:00 AM

Was this pulp oversized?

Standard pulp size but thicker than usual. It started out at 194 pages, dropped down to 162 afer half a dozen issues, and stayed at that size for a while before gradually shrinking into the 140s. The final issue was only 130 pages, but that's still thicker than most pulps.

Idle curiosity if it was "always poker," or if there are western pulp covers out there with a gunfight breaks out over a roulette wheel or a game of faro or dice or . . .?

(Probably not tiddly-winks or table tennis, though.)

Sorry; that "anonymous" was me. I did the "name and URL thing" but had to refresh and didn't notice the name went away.

I'm pretty sure I've seen roulette wheels with fights going on around them on Western pulp covers, but poker was a lot more common.

I imagine the "always poker" idea came from movies & TV. Just like the idea that a saloon only served beer & rotgut whiskey.

I imagine blackjack got played when the house had someone to deal. Who knows what old country games came via newly arrived Americans.

I remember a History Channel series about the west told about a Tombstone bar that prided itself on serving over twenty fine wines. And that that was not too uncommon. When I wrote a Masked Rider tale for Airship-27, I had Wayne Morgan enter a saloon and ask for wine. The barkeep replied that he just got some in from (a very real, period authentic) place in Herman, Missouri.

Movies & TV usually don't have time for that kind of detail.