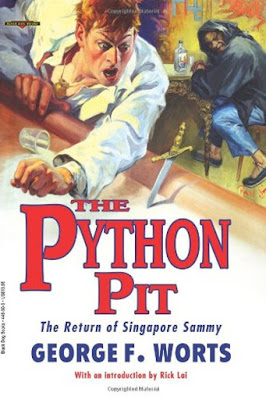 I wouldn’t have guessed that it’s been more than ten years since I read, enjoyed, and blogged about SOUTH OF SULU, the first collection of George F. Worts’ Singapore Sammy stories from Black Dog Books. It seems more recent than that, and the stories are still pretty fresh in my memory, which means they were good ones, I guess. Now I’ve read THE PYTHON PIT, the second Singapore Sammy collection, also published by Black Dog Books, and thoroughly enjoyed it as well.

Singapore Sammy is really Samuel Larkin Shay, red-headed American adventurer in southeast Asia during the 1930s. The character first appeared in 1931 in a series of adventure yarns published in the pulp SHORT STORIES (the ones collected in SOUTH OF SULU). Sammy is searching for his father, a conman named Bill Shay, looking for vengeance because the old man deserted Sammy’s mother, and also because Bill Shay has possession of a will that means Sammy will inherit a fortune if he can get his hands on it.

Later that same year, Worts moved the series over to ARGOSY. The first four stories to appear there are the tales collected in THE PYTHON PIT, starting with “Sapphires and Suckers”, a novella which was serialized in two parts under the title “Singapore Sammy” in the December 12 and December 19, 1931 issues of ARGOSY. It serves as an adequate introduction to the character for anybody who hadn’t read the earlier stories in SHORT STORIES, explaining about Sammy’s quest to find his father. He gets mixed up with a beautiful young woman whose father is a dangerous criminal and who, in partnership with Bill Shay, has sold the young woman’s fiancee a worthless sapphire mine. Or is it worthless? That becomes the question, leading to intrigue, double-dealing, and considerable danger for Sammy. He’s good at staying a couple of steps ahead of everybody else, though . . . except for his father, who always seems to give him the slip.

More than a year passed before Sammy reappeared in the three-part serial “The Python Pit”, in the May 6, 13, and 20, 1933 issues of ARGOSY. At 30,000 words, this is almost a novel. Sammy and his sidekick, Lucifer “Lucky” Jones, reluctantly agree to take a beautiful young woman to the remote island where her father has been mauled by a tiger. The problem is, the island, called Konga, is rumored to be inhabited by a race of gigantic cannibals and haunted by the ghosts of all their victims. They set sail on their schooner, the Blue Goose, anyway. Sammy expects to run into trouble, and that’s what happens, since nothing about the situation is exactly what it appears to be at first. There’s a ton of action in this one, and Sammy comes face to face with Bill Shay again. Worts massages the back-story in this one, revealing that the villainous Shay is actually Sammy’s stepfather (whether that was the intention all along, I don’t know, but I sort of doubt it). He also introduces another recurring character to be a thorn in Sammy’s side, the lovely but treacherous Shanghai Sally. Worts manages to get all this in without ever letting up on the breakneck pace and the vivid writing, which makes “The Python Pit” one of the best pure pulp adventure yarns I’ve read in a long time.

Singapore Sammy next appears in “Isle of the Meteor”, a complete novelette published in the August 19, 1933 issue of ARGOSY. Lucky Jones is off on another adventure when this yarn takes place, so Sammy has to handle all the danger himself when he agrees to help out a dying sea captain and deliver a cargo of supplies to an isolated island where a group of communist-leaning, anti-war Americans established a colony during the Great War (World War I, to us). Of course, when Sammy gets there, surprises are waiting for him, most of them quite perilous, including another encounter with Shanghai Sally. Bill Shay is mentioned in this one but doesn’t appear. It’s a good, fast-moving tale with some particularly brutal scenes near the end.

The final story in this volume is “A Whisker of Buddha”, originally published as “Buddha’s Whisker” in the May 26, 1934 issue of ARGOSY. Sammy is in bad shape when this one opens, having had ownership of the Blue Goose stolen out from under him and Lucky Jones while he was drugged, by none other than Shanghai Sally, of course. He wakes up in Rangoon, in a fog from the mickey Sally slipped him, but then some of the local criminals start approaching him, wanting to hire him for a big job. This tells Sammy something big is up, so he finds Lucky and before you know it, they’re up to their necks in an adventure that involves infiltrating a secret ceremony that can get them killed and stealing a small, jewel-encrusted chest that’s supposed to contain an authentic hair from Buddha’s beard. This is the weakest story in the collection because it takes a while to get going, but once it does it’s pretty darned good, with lots of exciting scenes.

It also lays the groundwork for the next story, the only full-length novel in the series, THE MONSTER OF THE LAGOON, which I also happen to have in reprint. As much as I enjoyed THE PYTHON PIT, I’ll probably get to it fairly soon.

I read the previous book and loved it. Thanks for reviewing this one, James. I'm poorer by twenty.

I read the first book after you reviewed it - can it really be ten years? - and liked it a lot. I bought this and read the first story, but stalled. I’ll have to finish it up soon!

If I had guessed, I would have said it had been three or four years since I read SOUTH OF SULU, five tops. But my blog post about it was April 1, 2008. Where does the time go?

"A Whisker of Buddha" is the one where our boys battle a village full of Buddhists who, as apparently is the Buddhist costume (who knew?), practice ritual human sacrifice, right?

I read MONSTER OF THE LAGOON a couple of years ago and enjoyed it quite a bit. The monster in question tips the series over into sorta fantasy/sf for me (if the Killer Buddhist Cult in the previous story hadn't already seemed to come from a world a little askew from the one I live in). Mild spoiler warning for anyone else considering the series is that one should read the earlier stories first, as some things happen in MONSTER that change the template of the series thereafter.