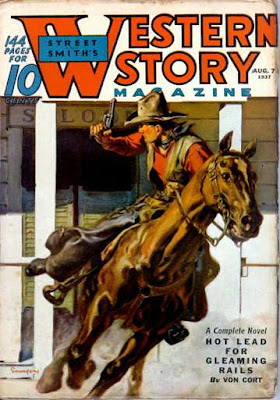 I’ve seen the name Van Cort in the table of contents in numerous Western pulps and have read at least one story under that name that I recall. I enjoyed it, too. I found out recently that Van Cort was a pseudonym for Wyatt Blassingame, a prolific and well-respected author of Weird Menace and detective tales for various pulps. (I believe he was also the brother of well-known literary agent Lurton “Count” Blassingame.) I don’t think I’ve read any of Blassingame’s work under his own name, although I have a couple of collections of it, but I did just read his short Western novel “Hot Lead for Gleaming Rails”, published in the August 7, 1937 issue of WESTERN STORY (with the first name of the pseudonym misspelled), and thought it was very good.

The protagonist of this violent yarn is Lee Carey, a young man who works for the railroad obtaining right-of-way for new lines. He returns to the town and the valley where he grew up and still owns an abandoned ranch, with the intention of building a spur line into the area, but he’s also out for revenge on the crooked cattle baron who ran him out years earlier. Along the way he helps out a young newspaper editor and the man’s wife and child, so Lee decides that starting a newspaper and getting his new friend to run it will help him mold public opinion in favor of the railroad. He also meets a beautiful young woman who’s come to the area to search for her missing father, but she winds up throwing in with Lee’s old enemy the cattle baron. One more complication is the presence of the Laredo Kid, an old friend of Lee’s who has turned outlaw. Having the Kid on his side may be more hindrance than help for Lee.

Blassingame does a fine job of weaving these strands together into a fast-paced plot that includes a number of shootouts and bushwhackings, culminating in an epic battle. Even while he’s doing this, however, he manages to work some moral complexity into the story, as not everything turns out to be as black and white as it appears at first. The good guys are not always sympathetic, and all the bad guys aren’t stereotypical villains. Blassingame writes in a smooth, clean style as well, without the overdone dialect and flowery descriptions that sometimes show up in Western pulp stories. This reads more like a novel that would have been published by Gold Medal in the Fifties.

As far as I can tell, Blassingame wrote only a couple of full-length novels as Van Cort, but I’m going to hunt down copies of both of them. “Hot Lead for Gleaming Rails” is available in an e-book collection, which is where I read it, and if you’re in the mood for a good hardboiled Western yarn, I recommend it.

I have read a lot of Blassingame’s Weird menace works and I think he authored a few Spiders (but l might be having a senior moment). Regularly enjoyed his stuff. Never imagined he wrote Westerns also, now I am curious.