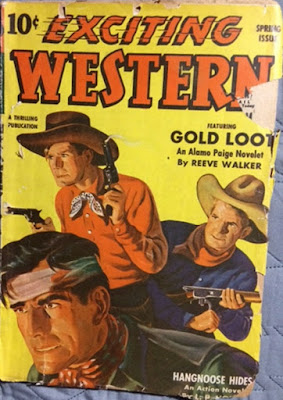 This is a pulp that I own and read recently. The picture (not a scan this time) is of my beat up copy, chunk out of the cover and all. I’ve read some other issues of EXCITING WESTERN, mostly for the Tombstone and Speedy stories by W.C. Tuttle, but this one comes before that series debuted in the magazine. It has some other series stories, though, and in fact leads off with one.

“Gold Loot” is the sixth installment of a long-running series about Pony Express rider Alamo Paige. Walker A. Tompkins began the series, writing under the name Reeve Walker, but when he went off to World War II, Charles N. Heckelmann and Chuck Martin took over for him and Reeve Walker became a house-name. (This information courtesy of Will Murray.) I suspect that “Gold Loot” is by Martin, but I don’t know that for sure. Whoever the author is, it’s a pretty good yarn. A former Pony Express rider who’s been fired and turned renegade plans to hold up the Rock Creek, Nebraska, station, which happens to be managed by a young Wild Bill Hickok, who’s good friends with Alamo Paige. Paige is ambushed by the would-be robber and his partner, a beautiful young blonde gets kidnapped, there’s a chase through a Nebraska blizzard, dynamite gets thrown around and stuff blows up real good . . . You get the idea. The plot may not be ground-breaking, but man, the action never lets up and it’s pretty well-written. I really enjoyed this one a lot and am eager to read more Alamo Paige stories.

With a title like “Sad Sam’s Joy Jag”, you’d expect both a humorous story and a series entry from this story by Thomas H. Regan, who published only about a dozen stories in his career. But while it does have its lighter aspects, this tale seems to be the only one about the cowpoke known as Sad Sam. It opens with a nice action scene that finds Sam and his rancher boss holed up in a cabin that’s under attack by numerous gunmen. That develops into a story about a battle over water rights, and Regan does a good job with it. As I’ve mentioned many times before, I’m not a big fan of humorous Westerns, and a few things in this one made me roll my eyes (like Sam’s horse being named Snigglefritz), but overall I found it a pretty entertaining yarn.

It’s no surprise that I’d enjoy the novelette “Hangnoose Hides”, since it’s by one of my favorite Western authors, L.P. Holmes. Down on his luck cowboy Bucky O’Dell gets tangled up with a ring of bad hombres dealing in stolen cowhides, is framed for a crime he didn’t commit, and is locked up in jail with a rampaging lynch mob on the way to string him up. Getting out of this fix and exposing the villains behind the whole thing will be quite a challenge. Holmes was an expert at taking traditional plots and making them seem fresh, and he does so here, mostly because Bucky O’Dell is a really likable protagonist and the writing is just as smooth as can be. A fine, entertaining yarn.

“Ranger, Dig Your Grave” (a good title) is an entry in the Navajo Tom Raine, Arizona Ranger series, written under the house-name Jackson Cole. I’ve read some of these yarns before and enjoyed them, and this one is no exception. Raine is sent to find out who’s been murdering farmers in Mormon Valley. The plot is set up so it appears we’re going to get a cattlemen vs. sodbusters story, but then the author provides some nice twists to go with the well-written action scenes and the result is the best Navajo Tom Raine story I’ve read so far. I don’t know who wrote it, but C. William Harrison’s name has been associated with this series and I suspect it might be his work.

Gunnison Steele, whose real name was Bennie Gardner, wrote a couple of dozen novels for the Thrilling Group’s Western character pulps TEXAS RANGERS, RIO KID WESTERN, MASKED RIDER WESTERN, and RANGE RIDERS WESTERN, but he was much more prolific at shorter lengths, authoring several hundred stories for a wide variety of Western pulps. His story in this issue, “Man-Sized Maverick” is about a fourteen-year-old boy who sets out to solve his grandfather’s murder and catch the killers. As always with Gardner’s work, this yarn is well-plotted and well-written and very enjoyable.

Allen K. Echols was also quite prolific during his thirty year career writing mostly for the Western pulps. His short-short story in this issue, “The Trail Herd”, is about a rustler selling a stolen herd, and it has a nice twist at the end. I haven’t read much by Echols over the years, but maybe I should.

Joseph J. Millard, writing as Joe Millard, is best remembered as a paperbacker, having turned out a number of original novels in various genres, as well as being a dependable scribe of movie novelizations and tie-ins. But he wrote quite a bit for the pulps as well, including the short story “Guns of Revenge” in this issue. It starts out as a fairly standard tale of a man returning to his home town to get vengeance on the man he blames for the death of his parents. But nothing is what it seems at first as Millard provides several good plot twists and some decent action along the way. This is another good story and wraps up a really fine issue of EXCITING WESTERN. I enjoyed every one of the stories and am looking forward to reading more issues of this pulp.

Good lineup. Didn’t Millard write a bunch of westerns in the late 60s with “no name” as the main character (from Good, Bad and Ugly”). I read a couple but wasn’t all that thrilled.

Yes, he did. He wrote the novelizations of For a Few Dollars More and The Good the Bad and the Ugly, then five or six original novels with the character. I have a couple but have never read them.

I recall Millard mostly for the title of his most famous or infamous science fiction story, THE GODS HATE KANSAS. Not that I've ever read the story (I believe the rationale is just that the alien invasion fleet lands there and takes over that area first.)

Given the number of western characters who seemingly went by the names of their home states, that title could almost work for a western as well. Pious young cowpoke "Kansas" Smith skips church one Sunday, and this leads to him being framed and forced onto the owlhoot trail. He hides out with a local Native American tribe, but somehow manages to offend their medicine man, so he now seems to have plural "gods" against him as he fights to clear his name. . .

You know, I could write a book just from that paragraph . . .

Go for it! I make you a free gift of it.