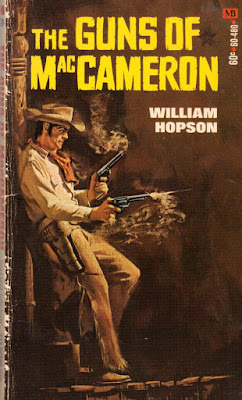 THE GUNS OF MacCAMERON starts off as a vengeance quest book. Former Confederate cavalry officer Tyler MacCameron has been roaming the West for eight years, hunting down and killing the men responsible for burning his plantation and murdering his wife and infant son after the war. He’s caught up and dealt with all but two members of the gang when he rides into the small Wyoming settlement where both of his targets have started new, apparently respectable lives.

From that point, however, the book doesn’t play out as you might expect, as it becomes a range war yarn instead, involving cattlemen and sheepherders. In this case, however, the two sides aren’t enemies. The big cattle and sheep ranchers team up to try to eliminate all the smaller outfits, and I’m sure you can guess which side MacCameron winds up on.

William Hopson started out in the Western pulps and went on to a long and successful career writing Western novels for hardback and paperback publishers. He wrote a few mysteries, as well, but I’ve never read any of them. I’ve read quite a few of his Westerns, though, and found his work to be inconsistent but mostly good, bordering on excellent, although he was capable of turning out a stinker now and then, especially in his later years.

THE GUNS OF MacCAMERON, published in hardback by Avalon in 1969 and reprinted in paperback by Macfadden-Bartell in 1971 (the edition I read) is one of Hopson’s good novels. The hero and the main villain are pretty one-dimensional, but all the other characters are a nice blend of good and bad qualities, and some of them turn out different than you might think they would. Hopson had an odd, even awkward style in places, but he was very good at action scenes and there are plenty in this book. There’s a great battle between a man and a grizzly bear that’s not as one-sided as it sounds. All in all, the book moves along nicely and comes to a satisfying conclusion.

THE GUNS OF MacCAMERON isn’t a great Western novel, by any means, but it is a good solid piece of entertainment for fans of the genre. If you like Westerns and come across a copy, it’s well worth reading. That’s true of most of William Hopson’s books.
Posted by James Reasoner at 5:00 AM

Very apt assessment of Hopson. Showed some promise but never scaled the heights

You may have already done something like this, but I would sure be interested in seeing a post from you about, say, the top ten or twenty western novels that you've read. I'm always looking for recommendations for good books and certainly trust your instincts on it.

There are just too many I've enjoyed over the years! I'll name a few off the top of my head:

That's ten, but if I came up with ten tomorrow, I'm sure some of them would be different. I don't claim any of these are the "best", just books that I really enjoyed and in some cases remember vividly decades after reading them.

Oh, and BARB WIRE by Walt Coburn. THE NAME'S BUCHANAN by Jonas Ward (William Ard). THE MAN FROM DEL RIO by Jack Slade (Peter McCurtin, in this case). Any of the Fargo series by John Benteen (Ben Haas). RENDEZVOUS AT QUITO by Jackson Cole (a never reprinted Jim Hatfield novel from the pulp TEXAS RANGERS, written by Peter Germano). SADDLE THE STORM by Harry Whittingon. This could go on all day . . .

GUNFIGHTER'S PAY by William Hopson. (See, what did I tell you?)

Like Mr. reasoner I try a personal list of preferences about western novels, in a random order.
SHANE, Jack Schaefer
THE COWBOY AND THE COSSACK, Clair Huffaker
WARLOCK, Oakley Hall
THE SEARCHERS and UNFORGIVEN, Alan Le may
PLUMB DRILLIN', David Case
FARGO, Elmer Parsons
COMANCHE MOON, William R. Cox
GORDON D. SHIRREFFS and WILL HENRY/CLAY FISHER, most of the titles
THE STAR IN THEIR COURSES, Harry Brown
WARHORSE, John M. Cunningham
TIE MY BONES ON HER BACK, Robert F. Jones
BLOOD MERIDIAN, Cormac Mc carthy
Last but not least the one I consider a forgotten masterpiece: THE RUTHLESS GUN, T.C. Lewellen
As for the William L. Hopson novels I quote what Jeff Banks said in 20th Century Western Writers:
"Reading Hopson is like panning for gold. The prospector is usually all wet and goes for long period without discovering anything worthwhile, but when he does there is genuine cause for celebration". A title for all: Cry Viva!

I happen to have FARGO by Parsons and THE RUTHLESS GUN by Lewellen in the stack of books by my computer that I intend to get to Real Soon Now.