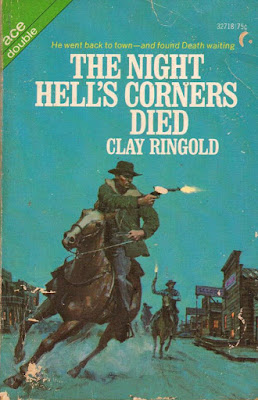 Clay Ringold was really Ray Hogan, and if you’ve read any of Hogan’s numerous Western novels published as Ace Doubles, you know what to expect from his work: a short, tough-minded, fast-paced action Western yarn, told in a terse, very effective style.

That’s certainly the case with THE NIGHT HELL’S CORNERS DIED, published under the Ringold name in 1972. This one is even tighter than usual, as Hogan compresses all the action into a single 12-hour span. The plot is simple: the respectable businessmen in the former trail town of Hell’s Corners decide it’s time to clean up the lawless element in the settlement, so they hire a town-taming marshal. But he proves not to be up to the job as the outlaws and the crooked saloon owner whose establishment is their headquarters all fight back. When the bad guys go on a rampage that threatens to destroy the town, local ranch hand and former gunfighter Cord Munger, who has put his violent ways behind him for the most part, winds up being the only chance for Hell’s Corners to survive.

This is pretty standard stuff, but Hogan puts a nice spin on it by having Munger be more of an anti-hero than a hero. He’s almost as unsympathetic as the villains and would gladly ride off and let the outlaws run roughshod over the town, if not for a young orphan with whom Munger feels a certain kinship, having been raised in an orphanage himself. Once Munger does decide to take a hand, his plan to battle a much superior force by himself is pretty clever.

Ray Hogan was never a ground-breaking Western writer, but he’s also never let me down. His books are always entertaining. I really enjoyed THE NIGHT HELL’S CORNERS DIED, and if you’re a fan of traditional Westerns, it’s well worth reading.
Posted by James Reasoner at 4:30 AM

Thank-you for the fine review, James. While in my early teens, I devoured Ray Hogan's Double D westerns which I checked out from the library. Somehow, I missed the fact that he also wrote under the name of Clay Ringold. Thanks to the review, I now know that there are several Ray Hogan "Ringold" westerns that I have not read. I'm headin' out for the nearest used book store!

I've only recently learned of Hogan, owing to positive comments on his work at the Pulp and Paperback FB group. Thanks for your review.

You describe his style as terse and very effective, and that's a tone I really like, and why I enjoy Donald Hamilton and Brian Garfield and Merle Constiner. How does he compare to them?

I don't think Hogan was as good a writer as the three you mention, Howard, but he's not far below them.

Thanks for the info, James. I have a Hogan on the back of one of my Ace Doubles by Garfield. I'll check it out soon.