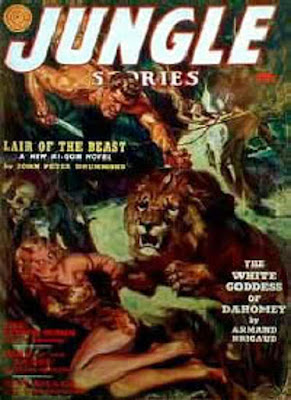 “Lair of the Beast”, from the Spring 1941 issue of JUNGLE STORIES, may be the best Ki-Gor novel I’ve read so far. It seems to be the work of yet another author who’s new to the series, although the style does remind me a bit of “Ki-Gor—and the Paradise That Time Forgot”. [Minor spoilers ahead.] In this one, Helene is taken captive by a gang of slavers who operate out of an ancient Moorish castle in the middle of the jungle. Ki-Gor, badly wounded in a battle with a vicious baboon, willingly becomes a prisoner because that’s the only way he can get to Helene. Then he has to recuperate, find a way for both of them to escape, and come up with a plan to destroy the evil slavers.

It won’t come as a surprise to anybody that he does so, but along the way the author comes up with some nice twists and dangers and a good supporting character in a somewhat shady Indian doctor who has thrown in with the slavers but isn’t as evil as they are. And he does redeem himself to a certain extent.

Whoever the author behind the John Peter Drummond house-name is for this story, he puts words together well and keeps this yarn moving along at a satisfying pace. The bloody, harrowing battle at the end is well-done, but again, it might not be exactly what the reader expects. A few things keep “Lair of the Beast” from being the top-notch pulp adventure tale it might have been. There’s no sign, not even a mention, of Ki-Gor’s sidekicks Tembu George and N’Geeso, and I’ve grown fond of both of them. The plot is a little thin, and the story tends to be bland in places, especially in the first half. A little more blood and thunder might have helped, although to be fair, there’s plenty of that later on. At one point, Ki-Gor does something really dumb. But he’s very clever later on. This sort of inconsistency is another reason I think this may have been a new author just getting his feet wet in the series.

All that said, I enjoyed “Lair of the Beast” quite a bit. It lacks the over-the-top goofiness of the earliest Ki-Gor novels but is a considerable improvement over the few right before it. I expect to continue enjoying this series for a good long time.

Gotta pick this up

You're probably tired of me saying this, but just wait until you get to the GOOD ones. I look forward to your reaction! There is definitely some blood 'n thunder coming your way...

That said, I agree that this one was a real step up in some ways.