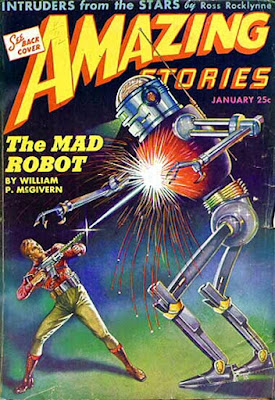 I ask you, even if you were a robot, wouldn't you be mad if a guy was shooting you in the chest with a ray gun? This cover is by Robert Fuqua, and I can't help but like it. Inside this issue of AMAZING STORIES are three yarns by William P. McGivern, the cover story under his own name plus one each as by P.F. Costello and Gerald Vance. Other authors include Ross Rocklynne, Ed Earl Repp, and Berkley Livingston. This sort of stuff may not be held in high regard these days, but I like it.
Posted by James Reasoner at 5:00 AM

I'm always ready to take a look at even minor work by McGivern or Rocklynne. Was there ever major work from Repp?

Repp was popular enough in the Western pulps that his stories usually made the cover, but beyond that, no, I don't think he did anything major enough to be of interest to anybody other than a few fans these days. In fact, he may be remembered more for the thinly disguised version of him in Frank Bonham's essay "Tarzana Nights" than for anything he wrote.