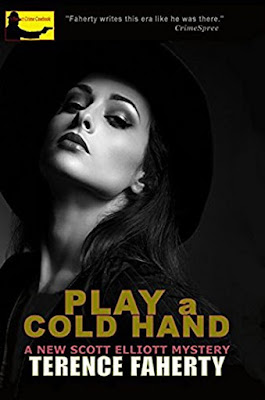 A while back I read THE HOLLYWOOD OP, a collection of stories by Terence Faherty featuring private eye Scott Elliott. These ranged in time period from the Forties to the Sixties, and I thought they were great. I picked up copies of some of Faherty’s novels starring Elliott but you know me, attention span of a six-week-old puppy, so I never got around to reading them. However, I recently got my hands on an ARC of Faherty’s latest Scott Elliott novel, PLAY A COLD HAND, and read it immediately. And I’m very glad I did.

This one takes place mostly in 1974, although there’s a lengthy flashback to 1952 and a murder that took place in 1944 figures prominently in the plot. Elliott’s old boss, long retired from the private detective business, is murdered while trying to solve one last big case. In fact, the book opens with Elliott being called to the scene of the murder and talking to a friendly cop, for all the world like the opening of a Mickey Spillane novel with Mike Hammer and Pat Chambers.

However, that’s the only thing in PLAY A COLD HAND reminiscent of Spillane. This novel is much more in the Raymond Chandler/Ross Macdonald vein, all the way down to a late reference to a Chandler novel that provides a clue. The plot is properly convoluted, involving mobsters, a con game, a beautiful torch singer, movie stars, blackmail, black marketeering during World War II, and numerous secrets bubbling up from the past to cause trouble in the present.

To put it simply, this is a wonderful book. It’s set in 1974, as I said, and reads like it could have been written then. It passes the Front Porch Test with flying colors, right down to the masterful solution that had me smacking my forehead and looking back to see if the vital clues were really all there. And sure enough they were.

Don’t let anybody tell you they don’t write ’em like they used to. Sometimes they do, and PLAY A COLD HAND is a prime example. It’ll be out soon from Perfect Crime Books, and I give it my highest recommendation.

I haven't read a book like this in a while, and I really love the genre. Last one was Big Red's Daughter by John McPartland. I just preordered this one. Thanks for reviewing it, James.

James: Thank you so much (again!).