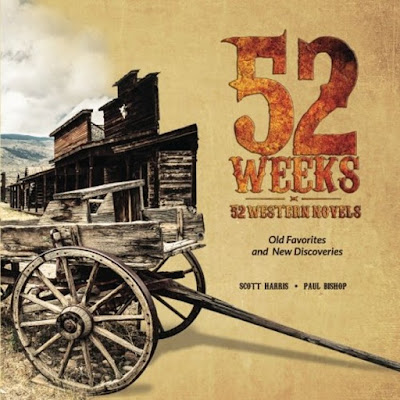 52 WEEKS • 52 WESTERN NOVELS is the first in a new series edited by my friends Scott Harris and Paul Bishop spotlighting some of the best in Western entertainment, starting with books both old and new and followed by volumes on Western movies and TV shows. It’s a great beginning to a very worthwhile project.

Written by a variety of Western authors and readers, including me, the entries in this book range from H.A. DeRosso’s bleak Western noir .44 to Will Murray’s classic history of the Western pulps, WORDSLINGERS. Each essay discusses a particular book and its author, along personal connections, behind-the-scenes facts, and movie adaptations for the books that were turned into films. It’s a fascinating approach that traces the traditional Western from its beginnings with THE VIRGINIAN and RIDERS OF THE PURPLE SAGE to THE LEGEND OF CALEB YORK by Max Allan Collins and Mickey Spillane, published in 2015. Anyone who hasn’t read Westerns before could read one a week, using this volume as a guide, and get a good sense of just what a wide range the genre really has. Plus there are plenty of really nice cover illustrations.

For what it’s worth, I’ve read 30 of the 52 books covered here, and I don’t doubt that I’ll read many of the others in the future. Quite a few of them are already on my shelves, just waiting for me to find the time. Whether you’re a Western fan or not, 52 WEEKS • 52 WESTERN NOVELS get the highest recommendation from me.

I have this book and it is excellent. I got my copy from amazon.com. There also are plans for a 52 week book on western movies and other themes. We need more books like this discussing the best in western fiction. We have plenty of books about SF and mystery fiction, let us get some more books like this one on the western genre.