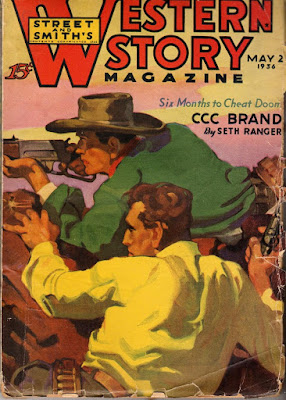 This is a pulp I own and read recently. I’m not that fond of the cover art, but the color scheme is nice and eye-catching. The scan is from the copy I read.

The lead novel, which takes up almost half the issue, is “CCC Brand” by Seth Ranger, who was really Frank Richardson Pierce. I’ve enjoyed everything I’ve read by Pierce under both of those names, and I’ve been wanting to try this series about the Civilian Conservation Corps. He wrote more than a dozen stories featuring the CCC for WESTERN STORY between 1935 and 1941, so they must have been popular. They’re not actually Westerns, or they’re contemporary Westerns, at best, but they are outdoor stories, and we all know that WESTERN STORY once cover-billed itself as publishing “Big, Clean Stories of Outdoor Life”.

But to get to “CCC Brand”, the hero of this yarn is young Dan Butler, who’s in such poor health that his doctor has given him six months to live. Dan wants to do something important with the time he has left, instead of just wasting away, so through a ruse he joins the CCC, even though he’s not really healthy enough to pass the physical. He winds up in the Pacific Northwest, and since he’s studied fish and game conservation, he soon comes up with a plan to improve the numbers of duck and salmon around the lake where he’s stationed. Something mysterious has been depleting the wildlife in the area. But before you know it, Dan’s run into a murder, some sinister characters, and a beautiful blonde. That’s a lot for a guy on death’s door to handle! Dan gives it his best shot, though.

There’s a lot in “CCC Brand” that’s pretty predictable, but honestly, I didn’t know how it was going to end and that’s pretty nice. Pierce had the knack of describing nature quite well, and his heroes are always likable. A couple of supporting characters, CCC “wood tick” Spruce Renfro and forest ranger Dave Logg, apparently appear in the other CCC stories, and they’re pretty likable, too. This is an entertaining yarn, and I’d certainly be happy to read more of the CCC series.

Ray Humphreys’ “Chief Plenty Dumb Horse”, despite its politically incorrect title, has no Indians in it. It’s part of a series, too, about Deputy Sheriff Shorty McKay, who evidently solves all the mysteries and corrals all the outlaws despite the sheriff’s low opinion of him. I’m not a big fan of most comedy Westerns, and while this one is pleasant enough, it’s so mild it’s almost not there.

“Hilltop Lady” by Harley P. Lathrop has a horse race, cattlemen vs. sheepherders, and a Romeo-and-Juliet romance. And it’s so mild it makes “Chief Plenty Dumb Horse” look tough and edgy.

“Bar-Nothin’s Bluff” by George Cory Franklin is also part of a series and is a more traditional Western about the foreman of a ranch crew who has to rescue one of his young punchers from a frame-up for murder. It’s a good enough story, and Bar-nothin’ (we never learn any other name for him) is an interesting character. I wouldn’t mind reading more of these.

“The Man From Mule Creek” is by Hugh F. Grinstead, an old-time pulpster, and concerns a youngster who sets out to play detective and catch a bank robber. There’s nothing really wrong with this one except that it didn’t hold my interest. It has the same bland tone as the stories by Humphreys and Lathrop.

There’s also an installment of a serial by Glenn Balch and assorted features, none of which I read, and a number of excellent illustrations by Nick Eggenhoffer. As you can tell, I found the fiction a mixed bag. I liked the CCC story quite a bit, the George Cory Franklin story isn’t bad, and the rest is pretty forgettable. I think by this time WESTERN STORY needed an injection of the sort of toughness to be found in the Popular Publications Western pulps, which it would get in a few years with the arrival of John Burr as editor.
Posted by James Reasoner at 6:00 AM

"CCC Brand" sounds like a good one. That's a story series I'd like to see collected. I love Pacific Northwest stories (being in Portland).

"Plenty dumb" is politically incorrect? Is there ANYTHING that's allowable in these everyone's offended by something times?

Would love to find some of the CCC stories. I included two short stories in my nonfiction CCC book. I have often wondered if anyone tried a CCC era western, now you have answered my question. I am going to see if I can find at least one of the stories. Thanks

I wonder if Robert Lowndes, who worked in the CCC himself when it was active, ever published any such stories in his eventual western magazines at Columbia.

Richard, if you can tolerate white Anglo characters called Uptight J Snivel or Greedhead R. Mansplian, you an have all the Chief Heap Big Dumbasses you want, but exactly why would you want them? At least in anything that isn't meant to be purely a farce?

Todd,
I get your point, but I gotta tell you, I love the name Uptight J. Snivel. Change it to Upright J. Snivel and he could be a character out of a W.C. Fields or Marx Brothers movie. Ray Humphreys' story in this issue probably couldn't be considered a farce, but it's definitely supposed to be a comedy. Not a particularly good comedy, mind you . . .

Yeah, bad comedy is a sad thing...as is typoing one's own jokes...Greedhead's last name is "Mansplain"...I think, generally, the comedy of humors names in the Fields and Marx comedies tended a bit wittier, but thanks...they were inspiration, along with Mel Brooks and Fred Allen, and Ernie Kovacs...

You certainly can feel free to introduce Mr. Snivel in any given future work...