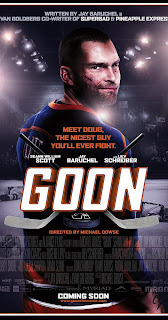 I’ve written before about my fondness for inspirational, based-on-a-true-story sports movies. GOON actually fits in that category, although it’s considerably different from most such movies. It’s a comedy instead of a drama, for one thing, and it’s extremely crude, vulgar, and violent. I liked it quite a bit anyway.

Seann William Scott, who I find a pretty likable actor in general, plays a young man who comes from a high-achieving family but works as a bouncer at a bar. When he gets in a fight at a hockey game with one of the players, he’s recruited by the local minor league team to play for them and serve as their enforcer. The team is terrible, but Scott’s character brings them all together, including an arrogant former NHL star, in time for them to make a run at the last wild card spot in the playoffs. There’s also a little romance along the way.

All this is based on—or at least inspired by—the career of Doug “The Hammer” Smith, who played for an assortment of minor league teams and was notable for getting into fights. Without having read the book about Smith on which the movie is based, I suspect that most of GOON is fictional. I found it pretty funny, but then, I’m a hockey fan, as well as a sports fan in general, and GOON does a good job of capturing the low-rent goofiness of minor league sports. This certainly isn’t a movie for everyone, so I can only give it a qualified recommendation, but I enjoyed it and think it’s worth watching if you’re a hockey fan and don’t mind a fairly high level of crude humor.
Posted by James Reasoner at 6:00 AM

The hockey scenes were filmed here in Manitoba including at the MTS Iceplex where I play twice a week. Many of the players were local extras, but I thought it was best not to try out. Guess age and my "career" of not playing tough hockey had an impact on my decision. Whenever I see fights in hockey, I remember my days as a linesman in junior hockey where I had to break them up. Some of the players went on to the NHL as members of the Philadelphis Flyers' Broad Street Bullies.

Kent,
That's very cool, no pun intended. I was never a hockey fan until this year, when my daughter started watching the games, but I've come to really enjoy them.

I turned it on by accident and really enjoyed it a lot more than expected.

Most hockey people rate Slap Shot with Paul Newman as the best hockey movie. However, my favourite is Paperback Hero with Keir Dullea playing a pro hockey player and Elizabeth Ashley his girl friend. The love scene in the locker room of a rink in a small Saskatchewan community is great. And I can still picture Dullea driving his red convertible in a wheat field. I expect many Canadian hockey fans had trouble accepting him as a hockey player. You can see the movie on YouTube.

I haven't seen SLAP SHOT for many years, but I remember that I really liked it. I also saw PAPERBACK HERO when it was new but not since then. I think I liked it, too, but my memory of it is pretty dim except for Elizabeth Ashley and Dayle Haddon. I was thinking about it the other day after watching GOON but didn't know it was on YouTube. Might try to watch it again sometime.

For some reason movies about minor league sports tend to appeal to me. They're just so much more colorful and eccentric.

I don't think I've seen MYSTERY, ALASKA. Definitely going to check that one out. Thanks, Jeff.

Yeah, I liked this one. A big part of what makes it work, I think, is that Scott's character is a genuinely sweet-natured guy. It's just that his one great gift is that he's good at beating the crap out of people and being a hockey enforcer gives him a niche where he can make use of it.

Liev Schrieber is also very good in it. He's an antagonist but not a villain.