Tuesday's Overlooked Movies: In the Heart of the Sea 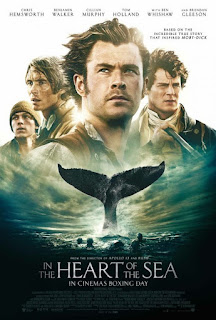 I knew that Herman Melville's novel MOBY DICK was based on actual incidents, but I didn't really know the story behind it. IN THE HEART OF THE SEA spins that yarn, the tale of the real-life whaling ship Essex and its encounter with, you guessed it, a great white whale. How accurate it is, I don't know, but I thought it was a well-done, old-fashioned adventure movie, not surprising since it was directed by Ron Howard, who is very much an old-fashioned director whose work has often reminded me of the movies made by Howard Hawks. Chris Hemsworth stars in this one as the first mate of the Essex, and I tend to like him, too. IN THE HEART OF THE SEA bombed at the box office and got mostly bad reviews, but I enjoyed it quite a bit.
Posted by James Reasoner at 6:00 AM

I really liked the movie, too. About 10 minutes into it, I realized I had a copy of the book someone at work had set out for whoever wanted it. So I read the book. I liked it better than the movie, and I loked the movie quite a bit. The film took some liberties with the story, especially where the whale was concerned. It didn't follow them in the book, just rammed the ship. The film also down-played the cannibalism that occurred in the lifeboats. I learned a lot from the book and will probably read more by the author

I've read the book. Waiting to see the movie.

I believe if this movie was released 15-20 years ago it would have been a smash hit. I liked both the book and the movie. It seemed the studios put a good amount of advertising into this film. Unfortunately mass movie audiences today are not very interested in these epics.

Sometimes filmmakers have to ask first, "Who's gonna go to this?" The new Tarzan looks as if it also should've considered that.