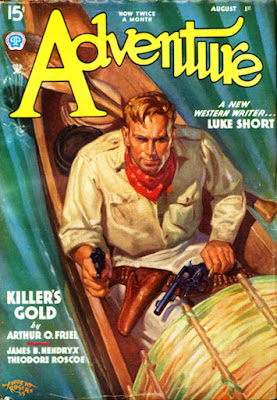 I like the pulp covers by Hubert Rogers, and this is a good one. Inside you'll find a serial installment of THE FEUD AT SINGLE SHOT, the first novel by that "new Western writer Luke Short", plus stories by Arthur O. Friel, Theodore Roscoe, James B. Hendryx, and Arthur D. Howden Smith. That's a pretty potent lineup!
Posted by James Reasoner at 6:00 AM

This is an issue I do not have and it looks like a good one, so I'll have to look for it at PulpFest in July.

My advice to Barry and other collectors of the *quality* pulps, try and collect all the issues of ADVENTURE from 1918-1948. These are the best years.

Concerning Hubert Rogers, the Windy City Pulp convention a few years ago had a stunning exhibit of his original cover paintings. My notes in this issue remind me that I read "Killer's Gold" by Arthur Friel in 1982. It's a 40 page novelette and I enjoyed it. In The Campfire Friel says it's based on fact. The hero Dolan, appeared in other stories.

Luke Short, one of the very best western writers, introduces himself in The Campfire. Looking at this issue makes me so glad that Popular Publications took over ADVENTURE and appointed the great Howard Bloomfield as editor. Otherwise the magazine might have died in the depression 1930's like other general fiction magazines such as THE POPULAR, COMPLETE STORIES, TOP NOTCH, etc.

Pretty impressive of Short to place his first story -- and a serial, at that -- in Adventure rather than a western pulp. And you can tell Adventure was impressed from that cover blurb. From what I've read of short, the hype was justified.


The 40 page Friel tale and the Arthur Howden Smith and the Roscoe in the pictured issue sent me to buy this on eBay, though it wasn't listed. (And really I have a lot of Adventure issues to read already...)

I just finished the November 10 1921 issue of Adventure and J Allan Dunn certainly impressed me once again with The Exterminator, maybe my second favorite thing by him after Barehanded Castaways, and certainly one of the grimmest stories I've ever read in this pulp. I wonder if REH read this story before he came up with (my favorite Conan story) Red Nails?. The Malemiut by Stanton C. Lapham (?) was also quite good in the Jack London style. And the letter in the Campfire where Brodeur justly praised Harold Lamb was nice to read.

Concerning the November 10th, 1921 issue that Craig mentions above, my notes state that I read most of the stories in the 1970's and J. Allan Dunn was certainly good at stories like "The Exterminator"(Great title!). The cover is a stunner by H.C. Murphy showing a ship in a fog. Murphy was a strange artist. His western paintings are mediocre usually showing a cowboy scowling with a cigarette in his mouth but his sea paintings are outstanding.

"First in the Jim Grim series. As with the others this is excellent political skullduggery wherein Jim Grim and Ramsden(who is nameless in this), along with Anazeh the Arab kidnap Abdul Ali and thereby prevent a war between Moslem, Zionists, and British. Jimgrim spends most of the time impersonating an Arabian religious fanatic. This whole series is full of zestful action and humor."

But I didn't like everything. The Sled Wheeler serial by Dr. John Cochrane though very popular with the readers, was a big disappointment to me and I didn't even finish it.