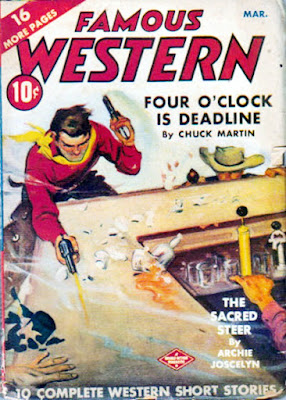 We're right in the middle of a saloon gunfight on the cover of this issue of FAMOUS WESTERN. Looks like the work of H.W. Scott to me, but I could be wrong about that. Inside are stories by Chuck Martin, Archie Joscelyn, Lee Floren (twice, once under his name and once as Cliff Campbell), and Fred Gipson, the author of OLD YELLER his own self, among other, lesser-known scribblers. Edited by Robert W. Lowndes, of course.
Posted by James Reasoner at 6:00 AM

I don't have this issue but the cover art looks more like the work of Leslie Ross.

Sure could be, Walker. I can see resemblances to both Scott and Ross.

Was Lowndes already editing the westerns in the war years? I thought there was a brief period of actual staff on hand at Columbia and There were at least three editors, one handling romances, one westerns and Lowndes fielding the balance...

The FMI says Lowndes was the editor of FAMOUS WESTERN starting with the previous issue, January 1943. Whether that's right or not, I don't know.