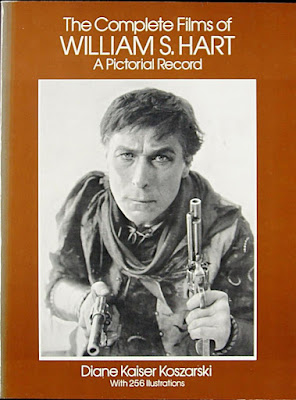 Since I wrote about William S. Hart's final film, TUMBLEWEEDS, a couple of weeks ago for Tuesday's Overlooked Movie, that got me interested in reading more about his life and career. There really hasn't been a lot written about him and his films, but I found a copy of this book and enjoyed it.

THE COMPLETE FILMS OF WILLIAM S. HART is just what it says it is, a listing of Hart's films including a synopsis of each one, contemporary reviews of them, and several photographs from each. This must have taken a lot of work, since many of Hart's films are pretty obscure. Diane Kaiser Koszarski also contributes a long biographical introduction about Hart's life, including some behind-the-scenes pictures.

I would have liked a little more critical analysis of some of the important pictures from Hart's career, like THE RETURN OF DRAW EGAN and HELL'S HINGES, not to mention TUMBLEWEEDS itself. But even so, this is an entertaining book and a worthwhile look at a towering figure in the early movie business. It's made me want to watch more of Hart's films, so with any luck I'll get to that soon.
Posted by James Reasoner at 6:00 AM

I'm a big fan of silent Westerns in general and William S. Hart in particular. Hell's Hinges is one of my favorite Westerns. There are a couple of scenes in Hart's movies where he's grimacing while clamping down on a cigarillo that make me think Clint Eastwood modeled his Man With No Name character after him.
If you're looking for Hart films, Grapevine Video sells a bunch.

How many of Hart's films are Lost at this point? Ot was he popular enough to have had all of them survive to one extent or another in reasonably accessible form?

Sean,
Thanks for the tip on Grapevine Video. I need to look around more on their site.

Todd,
I don't know the numbers, but I believe quite a few of Hart's films are considered lost.

Over the years, I've collected about 15 of Hart's films. Alphavideo has several DVD's available and you can find a few now and then on Youtube. BTW: here's a Tom Mix that just came up a few days ago: https://www.youtube.com/watch?v=sr57mDc07oU