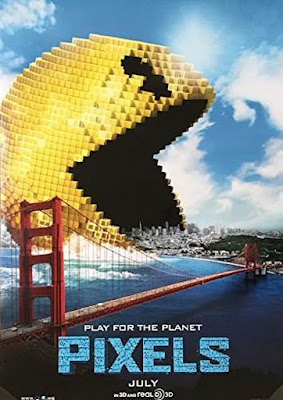 Okay, I know a lot of you really don't like Adam Sandler movies, but I usually do, and I'm stubborn enough to keep posting about them. PIXELS got the usual bad reviews. I enjoyed it quite a bit. The concept is pretty silly—a war-like alien civilization picks up a broadcast of a 1980s video game tournament, takes it as a challenge, and attacks Earth in the present time using light-based creatures modeled after Pac-Man, Donkey Kong, Asteroids, and other games from that earlier era. Adam Sandler plays the usual good-hearted sad sack who was once a great video gamer, his buddy Kevin James is the President of the United States (I know, that's a real stretch), and the always gorgeous Michelle Monaghan is a scientist who works for DARPA. It's up to them, along with fellow nerd Josh Gad, to save the planet from the alien invaders.

My experience with video games goes back even farther, all the way to the Pong game that my buddy and future brother-in-law Bruce and I fed quarters into in Angel's Pizza, our version of "Cheers" in the mid-Seventies. Livia and I had a first-generation Nintendo when our kids were little. So all the game stuff in this movie had a lot of nostalgic appeal for me, plus there's some decent music from the Seventies and Eighties. (That's kind of an oxymoron, but still...) Anyway, PIXELS is silly, the critics hated it, and I sat there smiling all the way through it. I'm good with that.
Posted by James Reasoner at 5:30 AM

My husband liked it too.

"Really don't like Adam Sandler" understates it by a long, long way.

I must admit I enjoyed the Zohan. But other than that and the Chanukah song, no.

The Chanukah song is probably the best thing he's done. Watching a clip of him singing it on SNL always makes me think, "He's just a kid!"

I don't expect to like the new Netflix film, but such work as PUNCH-DRUNK LOVE is fine, and FIFTY FIRST DATES wasn't terrible. Parodying himself on UNDECLARED early on was fun.

I kind of liked Pixels, too, although my nerd-brain couldn't help nitpicking the way they used the games. Like, the aliens recreate the games that were included in the 1982 space probe, but then they start throwing in post-1982 stuff like Duck Hunt, Tetris, and Paperboy. Eh, I'm probably thinking about it more than the filmmakers did, though...