Forgotten Books: A Haven for the Damned - Harry Whittington 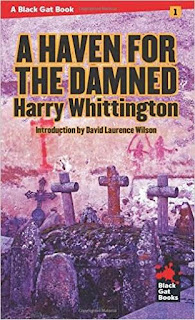 Harry Whittington has never disappointed me. Oh, sure, some of his books are better than others, but I've never read a bad one, or one that failed to pull me along with its breakneck pace, tight plotting, and brooding sense of desperation.

A HAVEN FOR THE DAMNED is one of Whittington's rarer books. At least it was in my experience. I never owned a copy of the Gold Medal edition, and I kept my eye out for Whittingtons in used bookstores literally for decades. Recently it was reprinted by Stark House as part of the Black Gat Books imprint, in a very nice edition with a fine introduction by David Laurence Wilson. And now I'm glad I never found it before, because I had an excellent, new-to-me Whittington novel to read.

A HAVEN FOR THE DAMNED is a "Grand Hotel" book, although the hotel in it is far from grand. In fact, it's a dusty, rundown place in a ghost town called Lust, New Mexico. (Whittington is one of the few writers who could get away with setting a book in a town called Lust and not have it come across as silly.) The only regular inhabitant of the town is a prospector named Josh Carrdell, but as often happens, a number of other people with back-stories of their own show up at roughly the same time: a couple of bank robbers and their wounded hostage; the hostage's wife, who gets roped in on the robbers' scheme; a middle-aged businessman running away with a woman thirty years younger than him so she can get a divorce in Mexico and marry him; and the woman's husband, following his wife and her lover and carrying a gun so he can have his revenge when he catches up to them. There's one other character, the prospector's dog, but he's not exactly cute and cuddly. 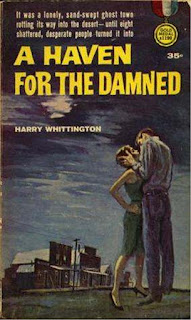 With a cast like that, you know there's going to be lots of angst and drama going on, and the way Whittington packs most of the book into a span of less than a day just increases the tension. Nobody was ever better at milking a plot for every bit of suspense in it, and he does a fine job of that in A HAVEN FOR THE DAMNED. I had to heave a sigh of relief (but in a very good way) when I came to the end of this novel. If you're a Whittington fan and haven't read it, you should grab it right away. If you've never read his work, it would be a good place to start. This is a top-notch suspense yarn and gets a high recommendation from me.

I fully agree. I read this one a couple weeks back on a plane flight and it made those cramped hours zip past effortlessly.

I've read plenty of Whittington's crime/suspense novels, but I need to read more of his westerns. Any recommendations?

I haven't read this one in over 40 years. Might be time to give it another go. As for westerns, SADDLE THE STORM is a good "Grand Hotel" kind of western, as I recall.

I've read just a few of his Westerns and of those that I have read HANGROPE TOWN was my favorite.

I'll second those recommendations and add that I recall liking DESERT STAKE-OUT and TROUBLE RIDES TALL quite a bit. Whittington also wrote six of the Longarm novels, too, under the house-name Tabor Evans, and my favorites of those are LONGARM ON THE HUMBOLDT and LONGARM AND THE GOLDEN LADY.

Like you, I've always enjoyed Harry Whittington's work. I'm glad STARK HOUSE is reprinting some of his rare works!

I thought SATURDAY NIGHT TOWN was fantastic, still my favorite of Harry Whittington's novels. The structure is similar to that of SADDLE THE STORM (small town, compressed time frame, shit happens).

I'm loving all the Whittington western recommendations, thanks.

And I'm a little stunned by Mr. Heft's championing of Saturday Night Town, a Whittington suspense novel I'd never even heard of before. Turns out to be a fine old Crest novel from 1956 with a gorgeous cover by Barye Phillips.

For my money the best Whittington (that I know thus far) is Forgive Me Killer (aka Brute in Brass). I read it in one sitting, snarling at anyone who approached close enough to disturb me. Absolutely riveting.

I read TAPROOT OF FALCONHURST a few weeks ago, and MIZ LUCREZIA OF FALCONHURST is in the pile somewhere. Except for TAPROOT, those Whittington/"Ashley Carter" Falconhurst books seem to be pricey on the used book market.

I read GOLDEN STUD, published under the Lance Horner name but at least partially ghosted by Whittington, I believe, and then SWORD OF THE GOLDEN STUD, as by Ashley Carter, and really liked them. Read a few of his Falconhurst books later and recall enjoying them. I still have one or two on my shelves that I haven't read. I ought to look for them.