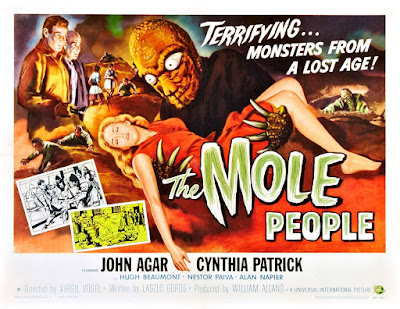 This is another good one I recorded from Svengoolie's show. THE MOLE PEOPLE, from 1956, is more than just another Fifties monster movie, though. John Agar, Hugh Beaumont (yep, Ward Cleaver his own self), and Nestor Paiva play archeologists on a dig in Mesopotamia who come across an ancient stone tablet bearing a message about a lost civilization that worshipped the goddess Ishtar. The tablet carries a curse with it, and after it's accidentally broken, a convenient earthquake opens up a passage leading deep into the earth. When one of the other scientists falls into it, Agar, Beaumont, and Paiva climb down to see if he's still alive, and what do they find? An underground city populated by the descendants of the ancient Sumerians, of course.

So, what do we have here? A lost civilization, an evil high priest (played by Alan Napier, who was the butler Alfred on the Sixties TV version of BATMAN), sword fights, a beautiful slave girl, and some stalwart scientist heroes. This is pure pulp, a yarn that easily could have been a serial in ARGOSY or ALL-STORY from the heyday of the scientific romance during the first three decades of the Twentieth Century.

The mole people of the title are almost a throwaway element, a subterranean race enslaved by the Sumerians, and they actually wind up being pretty sympathetic characters. The rubber heads and gloves they wear are obviously fake but pretty effective anyway. I had no trouble suspending my disbelief.

THE MOLE PEOPLE was directed by Virgil Vogel, who directed a lot of episodes of Western and detective TV shows I watched during the Sixties, and he keeps things moving along very nicely, packing quite a bit of plot and world-building into less than an hour and a half. Agar and Beaumont are pretty good as the heroes, Napier chews the scenery as the villain, and somebody named Cynthia Patrick is bland but pretty as the slave girl. The only real problem with this movie is the unsatisfying ending, which reportedly was changed at the last minute by meddling studio executives.

That's not enough to keep me from saying that if I'd seen THE MOLE PEOPLE when I was ten years old, I would have thought it was the greatest movie ever made. There's no quicksand, but it has almost everything else I loved back then (and still do, for the most part). I'm sure most of you have already seen it, but if you haven't and you're stuck in your third or fourth childhood like I seem to be, keep an eye out for it. It's a lot of fun.
Posted by James Reasoner at 6:00 AM

Saw this in the theater in '56, and I've seen it at least once since then. I share your feelings about the ending and about the movie in general. I was 14 or 15 when I first saw it, and I thought the mole people were kind of fakey, but in those days that's what passed for good makeup.

It could've used some quicksand, though.

Which reminds me that my movie for today has a guy running along on top of a train. Check out the trailer.

Since I no longer remember the ending, I could probably watch it again and enjoy it as much as the first time.

Definitely a fun film, and even a bit thoughtful. I love the minimalist effect of the heroes running around a dark soundstage with flashlights! And the opening with Professor Potter (of the educational TV specials from Bell Telephone in those days)is the perfect touch!

Sounds great and how did I miss it? I'll check this one out. It reminds me of one of my favorite pulp magazine titles, sadly never read but authored by someone like Norvell Page..."The Mole Men Want Your Eyes!"

At an early Pulpcon in the 1970's I was with a friend who no longer collects pulps and we were talking about the weird menace magazines. One of our favorites was "The Mole Men Want Your Eyes". He said watch this, and went over to the hotel registration desk and used this title as a pickup line. It worked and he met her in the evening for dinner.

Watched this one on Svenghooli a few weeks ago and reveled in its cheesiness.

Steve, the Mole Men story was written by Frederick C. Davis, one of the grand old pulpsters. It's from a 1938 issue of HORROR STORIES and has been reprinted at least twice.